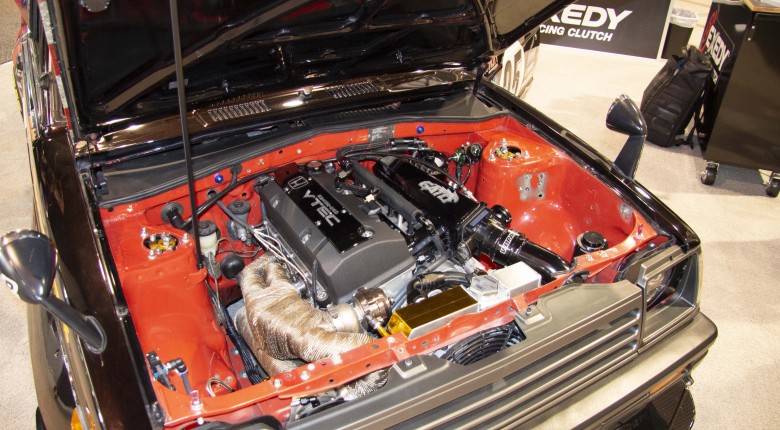 Originally a drift school car back in Japan, Angel of Horsepower Techs KP61 Toyota Starlet has had more than a few changes over the years. After running the supercharged 4agze at 180HP Angel wanted more power so turned to a turbocharged Honda F20C engine he already had kicking around. The new F20C setup makes 650HP thanks to the Precision 3582 Turbo strapped to it and One Ethanol fuel, but with stock internals, there are some more modifications planned to ensure reliability on track during Grid Life’s Time Attack season next year.

While the car already had a TRD widebody kit, it was nothing compared to the APR Performance and custom rear diffuser now fitted which will be dialled in over the winter. This will be done with the help of Angels AEM Electronics package via more than a few hours spent comparing data and making logical adjustments based on it to ensure there is traction where and when it’s needed on track.

ECU wise the car retains the AEM Series 2 ECU that came with the F20C transplant from another project, and it is complemented by an AEM 3 port boost controller, CD-7 dash and IMU. The fuel system sports a solid Radium Engineering kit, Injector Dynamics ID2000’s and a Horsepower Techs in house fuel rail. Needless to say, we’re excited to see what Angel and this setup can do once dialled in and if he utilises parts mentioned like Turbosmarts new electronic wastegate and AEMs Infinity series ECUs.

Want to learn more about EFI tuning cars like this? Start with some free lessons instantly right here.