So I'm putting a pmu16 into my ls2 Mazda Miata but I had some questions on how to hook up the starting and charging system. Should I only have 1 wire from the battery to the pmu or have one wire to the pmu and another wire to the ign with an inline fuse so I can give the pmu switched? Also, should I make it like my diagram, daisy chain the starter and the alternator, and have the starter feed the alternator's power back to the battery? This part of the system confuses me. 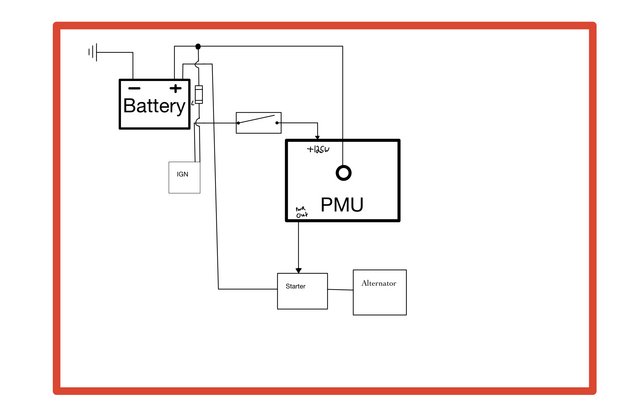 Page 31 of the PMU manual gives you a nice little diagram with the recommended power supply to the PMU. As you've drawn, the main power feed should go from the battery to the main power stud, and then you'll want to supply switched power to the PMU through the ignition switch. The starter solenoid is supplied by the PMU as you've shown. be mindful that some solenoids can draw 15 amps or thereabouts too. How you run the main power feed from the alternator is usually around convenience - I'll often run this to the positive stud on the starter as it means I don't need a separate run back to the battery.