One of the most critical decisions you'll need to make is what bearing clearances to use with your engine. When I use the term bearing clearance what I'm really referring to is the clearance between the inside diameter of the engine bearing and the outside diameter of the crankshaft journal. This is the space that will be occupied by the oil film when the engine is operating. As an approximate rule of thumb, it's common to use one thousandth of an inch clearance for each inch of journal diameter. So for example a two inch crankshaft journal would typically expect to see an oil clearance of approximately two thousandths of an inch or two thou for short. This rule of thumb doesn't translate quite so easily into metric unfortunately but the approximation I use is one hundredth of a millimeter clearance for every 10 millimeters of journal diameter. In this case if you had a 50 millimeter journal you'd expect the oil clearance to be approximately 0.05 millimeters or five hundredths of a millimeter. This is not to say that these values are set in stone. But rather this is just a guide to what you might expect to see. I always begin by finding out what the factory oil clearance specification is and I base my decisions on that. Until recently the accepted technique has been to add a slight amount to the factory clearances when building an engine that's going to produce more power than stock rev higher than stock, or perhaps both. This is referred to as a looser clearance and it wouldn't be uncommon to add half a thou, or 0.0005 of an inch to the factory specification when building such an engine. The rationale behind this is that under severe load or high RPM, both the engine block and the crankshaft are moving and flexing more than most people would assume. The easiest way to damage a bearing is to have metal to metal contact between the bearing surface and the crankshaft journal. And when there's a lot of flex going on this is more likely. With this in mind we can see the logic of applying a slightly looser clearance and hence providing a thicker oil film to protect these surfaces. The oil clearance chosen will also depend on the viscosity of the oil and we're seeing many modern engines these days using zero weight or five weight oils which won't work well with looser clearances. In this case if you retain the same grade of oil, you're likely to see the oil pressure drop off, particularly at low engine speeds if you build the engine with looser bearing clearances. With modern race engines, we're now seeing a drive towards tighter clearances in an effort to free up additional power thanks to the use of thinner oils. However it's still essential to consider the components being used and the amount of stress they're being subjected to. In order to get away with very tight bearing clearances, you need to be using a quality crankshaft that is very stiff and won't flex, as well as a block that's very well supported to ensure the bearing tunnel remains consistent. My personal approach is to base my decisions off the manufacturer's specifications as we know that these will be suitable for a stock engine. And in most cases they'll also be effective with mild to moderate increases in both power and engine RPM. If I'm building an engine that might make three to four times what the factory power rating was and perhaps spin 30 to 50% faster than stock in terms of the engine rev limit, I'll build the engine on the loose end of the factory tolerance. Of course some of this knowledge comes with experience with a particular engine and application. But if I have to make a judgement call, I'll always opt for a slightly looser clearance over a tighter one as the potential downsides of a tight clearance can be catastrophic. If you're inspecting a high power, high RPM engine after it's been run, it's always worth inspecting the bearing surfaces to see how they're wearing. If you're seeing signs of wear towards the outside of the bearing surface and nothing in the centre, this can indicate that the crankshaft journal is flexing and the bearing life may be improved with a very small increase to the clearance. So the key takeaways from this module are that we have a rule of thumb that we need approximately one thou of oil clearance for every inch of bearing journal diameter. Remember that the stock or OE specification for oil clearance is always a good place to start. If we move towards the tighter side of oil clearance than this can potentially offer a small improvement in power when using a very thin grade of motor oil. However this can also be dangerous if we don't have engine components sufficiently stiff to ensure that no metal to metal contact occurs. My own personal preference is always to build the engine on the looser side of the manufacturer's specification. 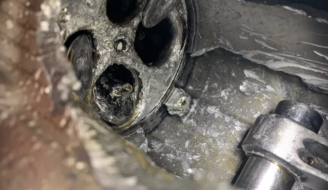 1UZFE engine failure update, plans for the future of the car and the latest giveaway. 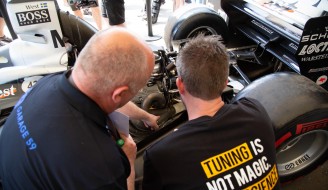 How can F1 cars run such tight bearing clearances?

Engines built for the likes of Formula...