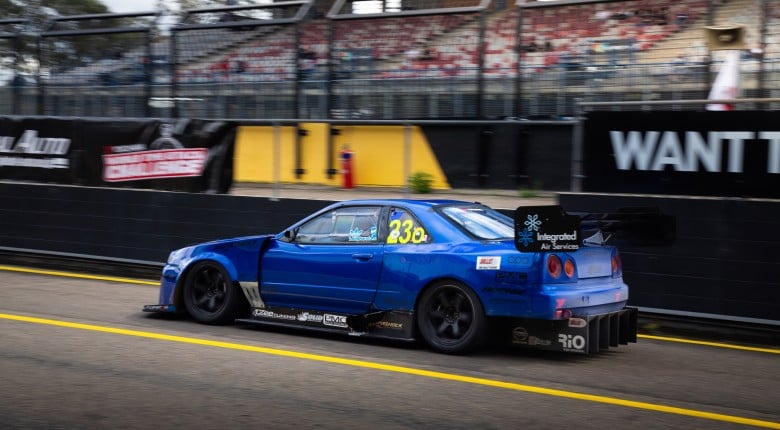 In the RB26 world most owners are pulling off twins in favour of big singles, but this is one R34 GTR that has had the opposite done, let's find out why.

Switching from a BorgWarner EFR9180 to twin Garrett G25-660 turbos was a bit of a leap into the unknown at the time for Peter McDonnell of PMC Race Engines, but it's one that has exceeded expectations on the Integrated Motorsports R34 GTR Time Attack Skyline.

With the old setup tapped at 950HP and the team chasing more power but not at the cost of increased lag, the twin turbo option was explored and implemented with 30 PSI of boost delivering over 1000HP depending on the rev range. Obviously, this is a substantial amount of power and as such boost is gear and speed dependent in order to make sure it goes to the ground in a controllable fashion with the help of the MoTeC M150 ECU.

While there are some downsides including the packaging being a lot tighter and higher pressure ratios, the ability to make 335HP more at the same boost level as the previous setup deems them more than acceptable trade-offs.

The 2.8L RB26 runs a max boost level of 35 PSI and revs out to 10,000 RPM through a Bullet Race Engineering billet block, Bill Miller forged aluminium rods, custom billet pistons and a Nitto head gasket. Sitting on top is one of Peters modified heads with beryllium seats, titanium valves plus porting and shaping on the inlet and exhaust ports respectively.