Enjoyed reading up on progress to date and will look into the Eaton PDM as I need something for my build also ... keen to hear how it works out. Quite jealous of the clean setup to work on ! And the new tools of course :D

Thanks David, the Eaton PDM is a real hassle to get here in NZ so be prepared to take one for the team. If you have american friends it helps ALOT!

Love it when a plan comes together. The IAT placement was all kinds of wrong if you read all the guidance so I had it relocated.

Right before the throttle body is recommended and look at where the element sits, right in the centre of the intercooler piping! 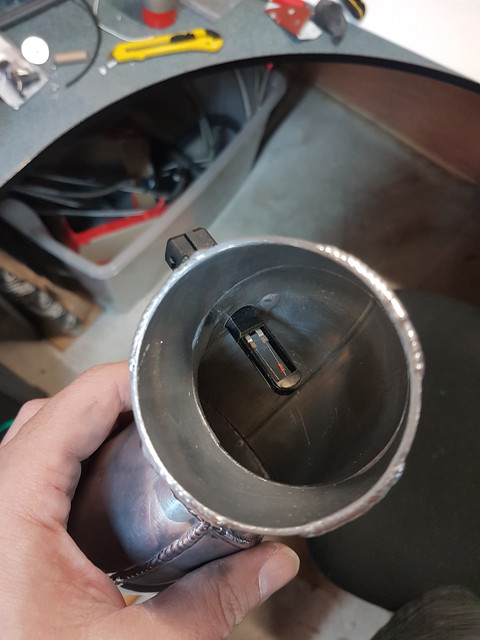 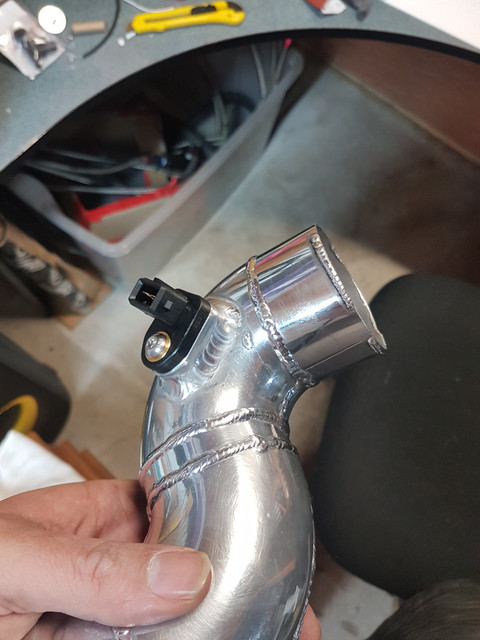 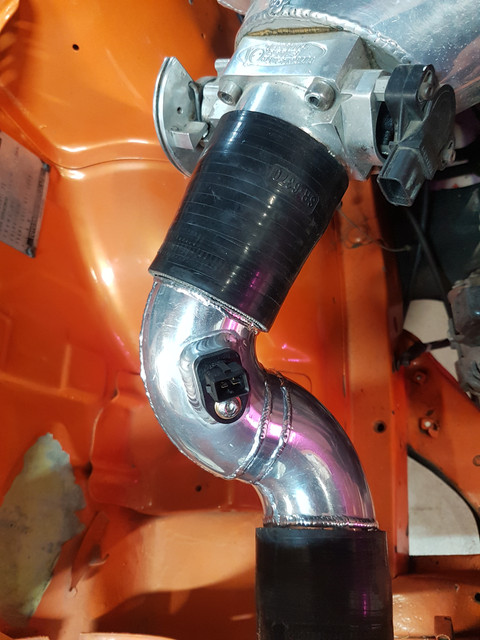 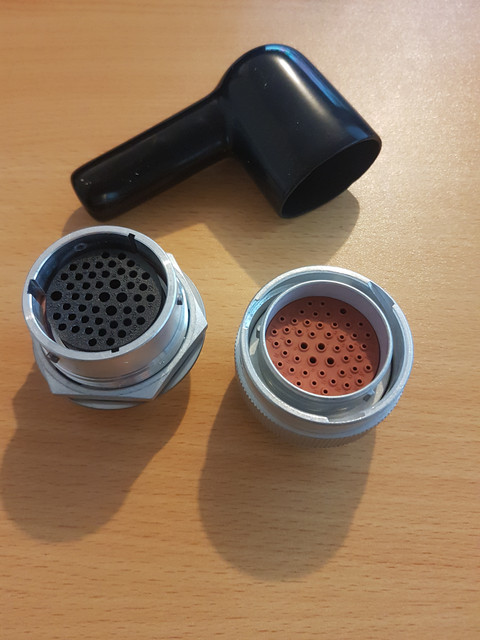 Having to outsource welding is going to mount up :)

Streamlining the cooling system of the SR. Goal here is to delete as much of the factory hoses under the intake manifold as possible and feed water to the turbo from the right hand side of the motor. 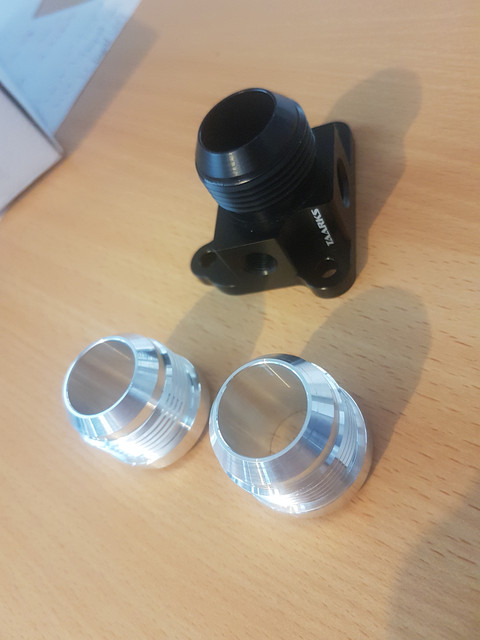 Been making steady progress, mostly harassing people I know to clarify I am going about the wiring configuration correctly. Was going to wait until this loom was all done and finished up but good to show some progress is being made in the backround. For those reading this I have never done anything like this before taking the club level wiring course and this is how far I have come since then. 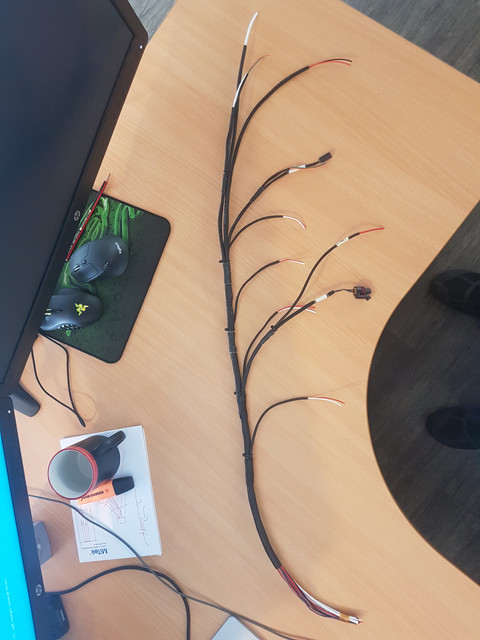 Welcome to my wiring nightmares, so again some inspiration and justification for a full rewire on this car.

But this pleases me. I have terminated the entire loom now except for at the bulkhead. 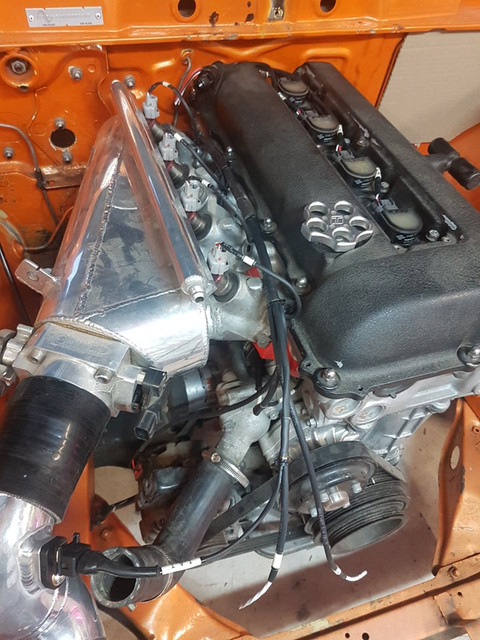 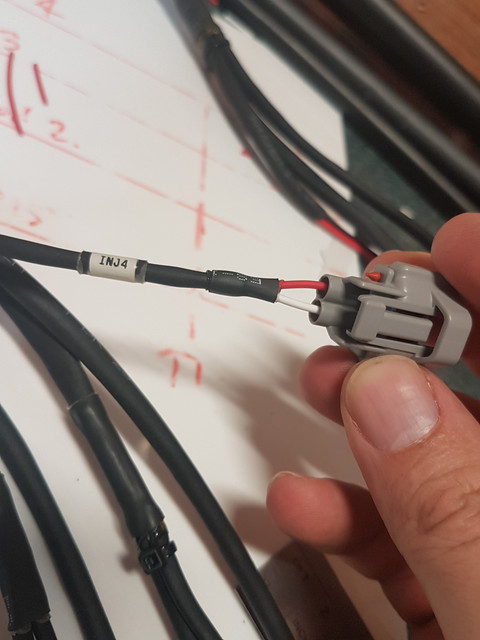 So next question for those looking, I have a very tight space for the return on the radiator, trying to fit in -16AN fittings.

Since it is such a short distance should I be worried about the engine torqueing, could I loop from a 45degree fitting into a strait into the head with no problems? I am assuming water is being pumped thru the system so no problems with general direction? 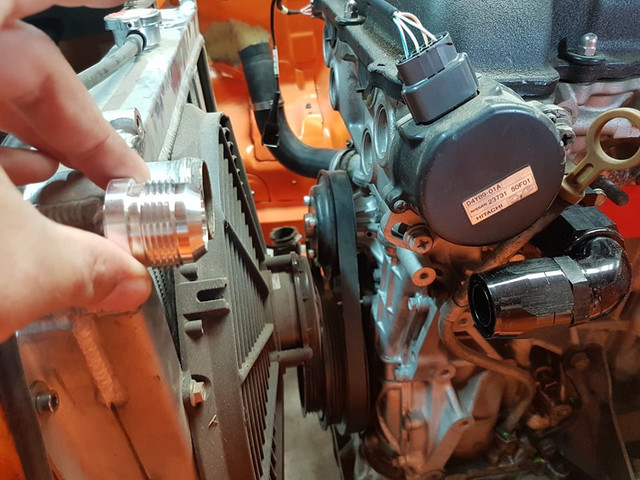 I diffently dont think you are gonna have a problem with the position of the waternecks. because this is your outlet, and since your radiotor sits above the the engine the hot water will by natural cause seek the top.

But i do not if your are gonna have problems with the engine torgueing. rather depends on your engine mounts.

Thanks for the reply,

Yes I agree engine movement is going to largely depend on engine mounts, I have my fabricator putting the AN fitting as close to the header tank of the radiator as possible and at a 45° downward angle so that with a 45° -16AN fitting it should sit level with the 90° fitting you can see in the pictures. It is going to result in a hose length of around 50mm between the two fittings. Fingers crossed it has enough flexibility to cope. Only time will tell.

Should have a update by the end of the week on the radiator front with fitted hoses etc for the last time.

Still gutted with the wiring in the switch but I have pushed on and finished the coil loom which I wasn't happy with the first two versions so after some refinement I now have a fully terminated coil wiring harness. 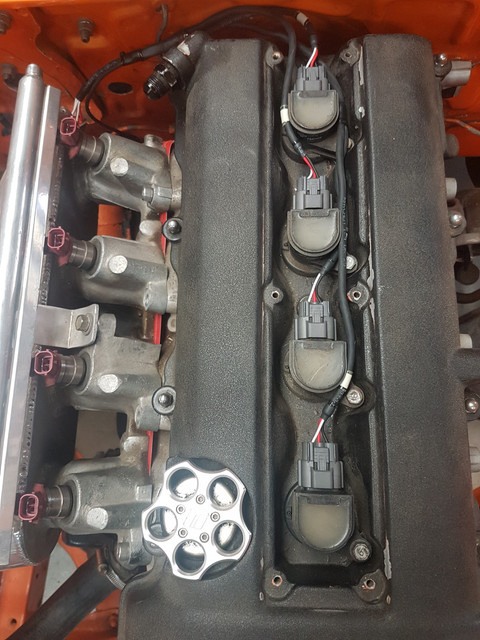 Just a few more supplies to arrive for the engine harness to be completed to the firewall then out with the engine and gearbox to get on with body work and relocating brake lines.

Just a better picture of the engine loom, so close now but being fussy about the boot on the bulk head connector so waiting on that. 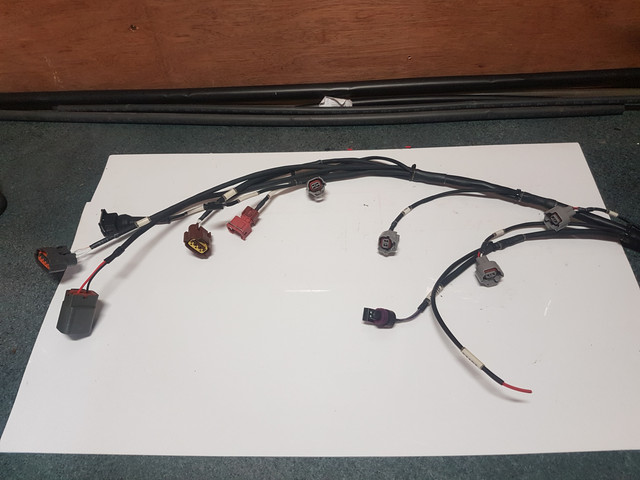 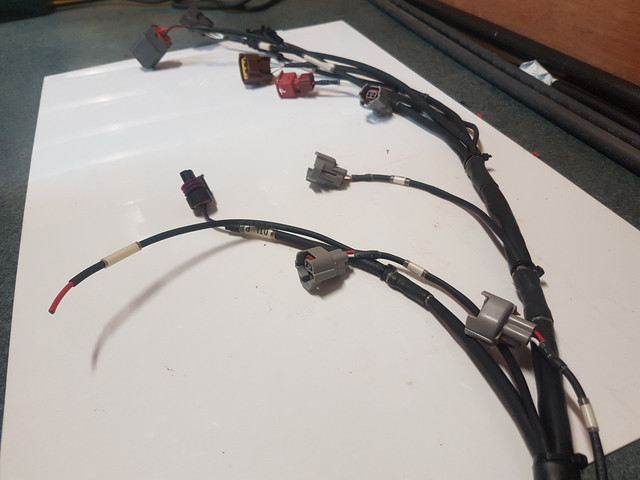 Intentionally overlooking the update surrounding the -an conversion for the cooling system as I have struck a problem. I am currently looking at options to get the top hose to fit in the limited space I have available. Will update this aspect of the build once it is finalized and I actually have a solution.

Focus recently has been to get the intake manifold sorted, it was a custom fabricated item that was on the car when I first purchased the car. Looks good but in practice it has some issues.

Firstly, there is not a single boss welded on this manifold. Instead they opted to tap the 3mm alloy to attached the IAT, vacuum lines and throttle body. Will discuss one at a time.

1/ IAT. As noted in the previous posts it was right at the back of the intake manifold on the underside, not an ideal spot so I have had a boss welded on my intercooler pipe right before the throttle body. Win. However this now leaves a hole in the intake manifold. Plan is to weld a boss on from EFI Solutions in Australia which will give me a series of vacuum lines so I can get that side of things sorted. Aiming to convert all vacuum lines to push-lok fittings to keep things easily maintained. 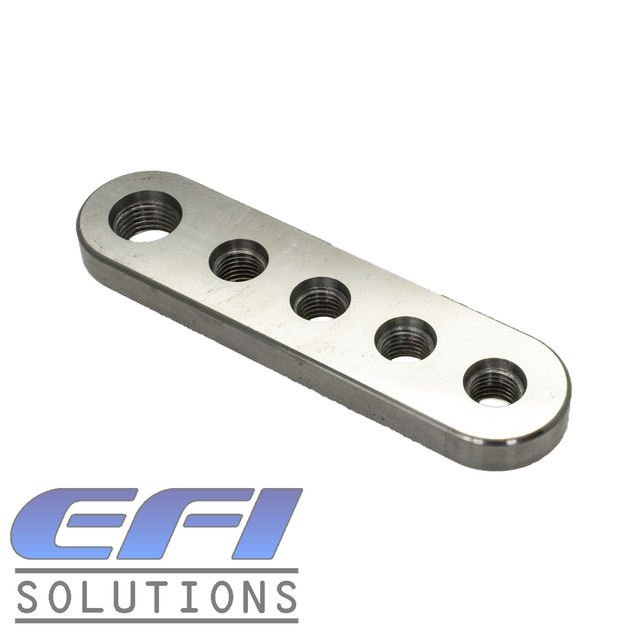 2/ Existing vacuum lines, now that I have a new location tucked under the intake manifold for these to come out from I need to weld over the back of the intake manifold. It was a mess! Once parts arrive to weld on I will update with finished pics. For now this is what it looks like. 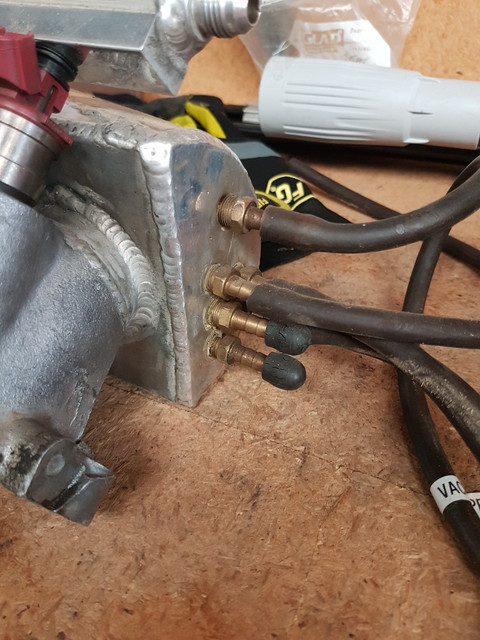 3/ Throttle body. Now this has a number of more serious issues which have arisen over the few years I have had this car. Now that I have stripped it all down it is apparent where they come from. Firstly the mounting of the throttle body to the intake manifold. Again no Boss used, BUT the surface of the manifold is not even flat. It would seem they made the end plate for the intake to suit the throttle body then welded it on with no consideration of the weld lifting the throttle body itself. This has created a leak at the two lower bolt heads as seen in these pics. 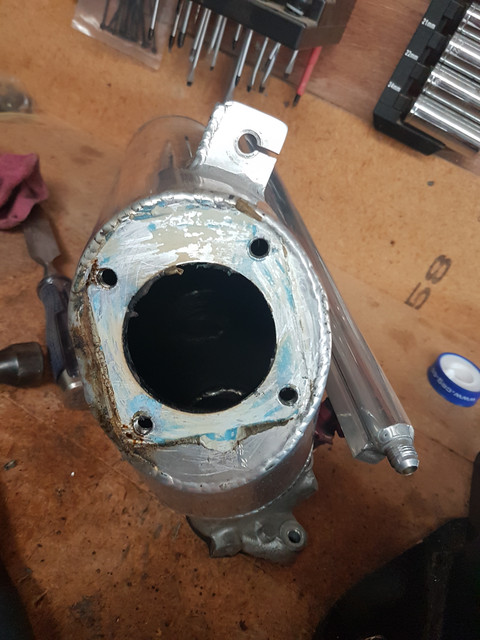 Not the end of the world. But I am having a new adaptor plate machined so that it can be welded on the intake and will also incorporate a o-ring seal between the adaptor and throttle body. Pics when it is made and on to follow.

The more serious issues, the throttle butterfly could move almost 10° without the throttle being pressed. This resulted in the car revving upto 3500RPM when stopping at lights or even on deceleration it continued to rev. Not ideal.

Turns out it was the cap screw on the right of this picture. The head has bottomed out on the throttle linkage and hasn't even threaded far enough to hold the shaft the butterfly attaches to. 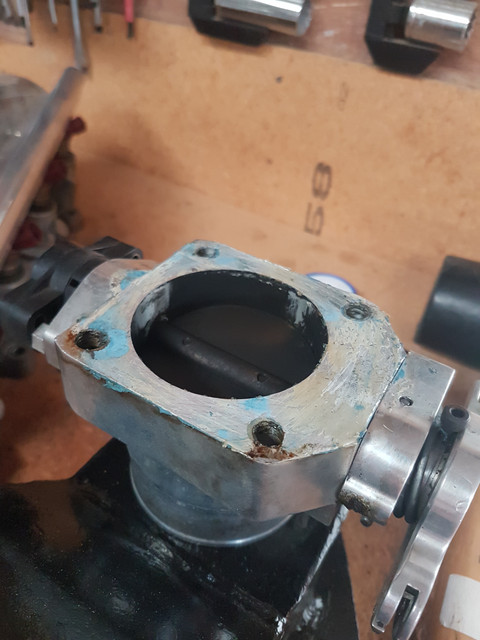 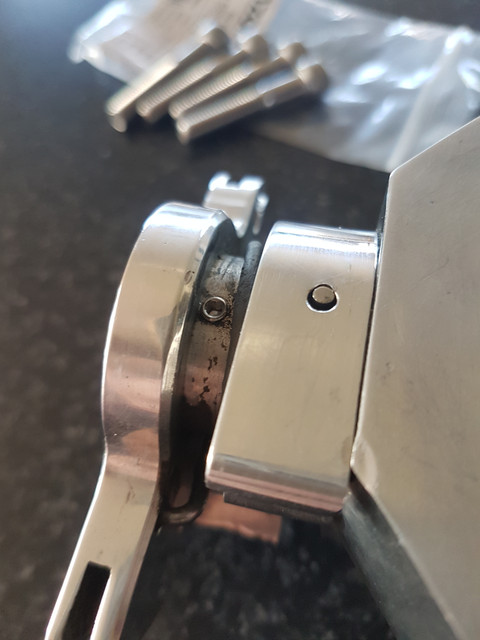 Next was the TPS, it was also held on with cap screws that had a head too small to locate it where it was supposed to be. When the car was dyno'd the first time my tuner @ross discovered the problem where the TPS was bottoming out on the underside on the throttle body housing resulting in the tps staying a WOT. (clearly this leads to some excitement when you climb up the car then jump off the pedal only to find it isn't slowing at all) Correct hardware securely fixed and the problem is solved. 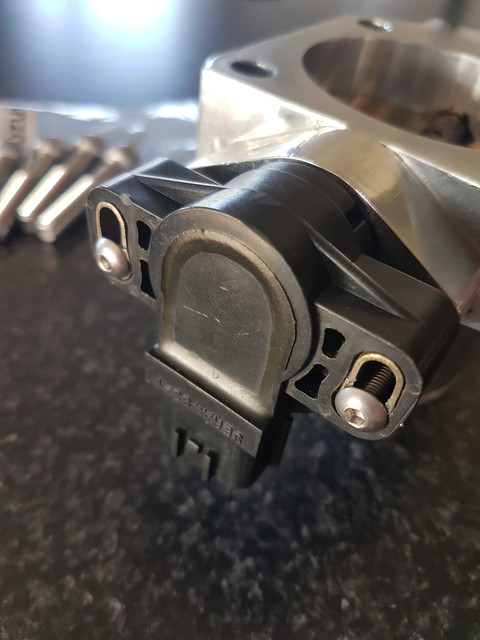 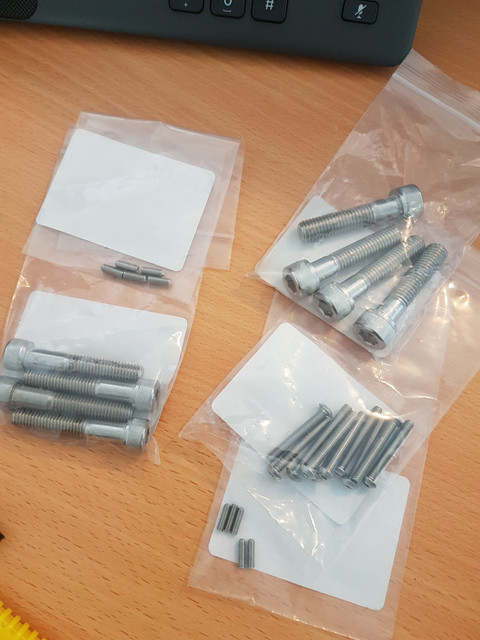 Proper hardware for those two fixes owes me a grand total of around 0.35cents. Hard to believe you wouldnt fix those at the beginning.

So once the boss parts arrive I will have them welded on and update intake progress. For now I have an engine crane on loan to remove the engine and gearbox ready for the engine bay overhaul.