OK I'm a little confused here, I can't seem to get my modelled fuel map to anything close to flat. I get nothing but peaks and valleys and I don't understand why exactly.

Here are some pictures of logs and what the map has set, this is Link G4+ set to modelled fueling. This is on a supercharged rotax 4tec motor. 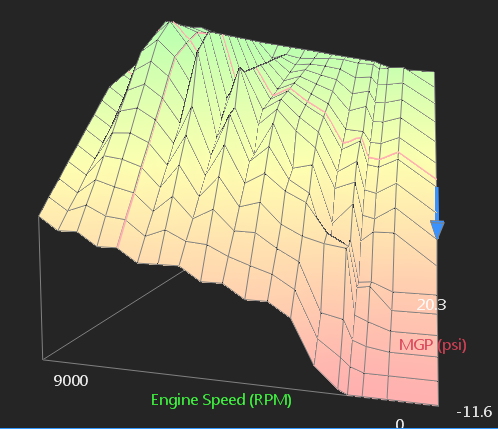 What engine? What mods?

It's a supercharged Rotax 4Tec motor, has a aftermarket cam and supporting mods.

Could the cam be causing this? I don't have specs on it, it's just some aftermarket one.

Are you on a dyno or just passing through the cells quickly?

This is a jetski, so I'm riding and pausing at 500 rpm intervals. At least 10+ seconds, trying to hold it as close to my target RPM at I can.

That's a 3 cylinder right? 3 cylinders have weird exhaust gas dynamics due to firing order. The cam could also be contributing to it, but without cam specs it's hard to say.

Yeah it's a 3 cylinder motor.

I guess this is the base VE map not the closed loop target lambda map?

Are you planning on running closed loop? I guess you are by saying "target AFR" (don't jetskis throw water down the exhaust for cooling)?

Give an engine what it wants not what you think it should have. All too often people decide that for example they're going to give the engine 0.8 lambda without seeing what AFR makes the most power under any given load conditions.

Given above, how are you proving your gains without a dyno? Guy behind my workshop has a dyno for outboard motors, it has some sort of hydraulic pump which bolts in place of the prop' all in a big tank of water.

What happens if you just throw some interpolation at it?

Yes it's the VE table.

No not planning to run closed loop, the target AFR table is there to have something to target for to setup the VE table.

Yes jetskis use water to cool the exhaust but that happens down the path from the wideband.

If I interpolate between the ridges the valleys will go rich.

I suggest you lower the peaks, and raise the valleys -- try just smoothing it to the "average" between the cells. There is always some interpolation unless you cells are really far apart (ie, 1000 RPM). Yes there can be odd valleys or peaks due to exhaust, but you will best find those by having a smooth map to start with, then determine the "center RPM" where a peak or valley occurs, and add a specific breakpoint for that.

It's not necessarily "wrong" to have peaks and valleys, one reason why this can happen is harmonics in the intake manifold.

Out of interest, here is the same engine with two different fuel maps that both deliver the correct amount of fuel to the engine.

One is MAP based and the other is MAF based.

Do you have an aftermarket or custom intake manifold or has anyone messed with intake channels?