Hello everyone I have an s13 with a 1jz-gte vvti and I've recently restored my gas tank. I have done away with the oem fuel lines and charcoal canister system and ran stainless steel braided ptfe fuel lines. Before I reinstall the fuel tank I was wondering the best way to vent fuel vapors from the tank since the charcoal canister is now gone. This system needs to prevent moisture from getting into the tank since I plan on running e85. I've read that ethanol is somewhat hydroscopic and I don't want corrosion buildup to occur. I was thinking a simple way to do this would be to install some kind of spring loaded one-way valve that will allow vapors to escape when the fuel tank pressure is slightly high but not stay open all the time.

I was hoping someone could shed some light on what the best way to achieve this would be.

Fuel tank vents are primarily to let air in. As the fuel is used, it needs to be replaced by air, you can't have a completely sealed tank.

this is a common misconception. perhaps if it were extremely cold then that's possible I suppose but as soon as fuel starts sloshing around, vapors will be generated and pressure will increase. thanks for the reply though.

Well, I've experienced it in our racing fuel cells. A clogged checkvalve (used to prevent fuel spills in the case of a roll-over) caused running problems (mechanical fuel pump couldn't keep up) after two laps, cracking the non-vented fuel cap fixed the problem.

It's a common view, because it ISN'T a misconception. I suggest you review your thoughts on this with some study into the issue.

If you're fortunate, the pressure drop in the fuel lines feeding the pump(s) will cause the fuel to boil and so prevent further further pressure drop as their pumping efficiency crashes and the ngine stalls. If you're unlucky, the fuel tank will be crushed by the pressure differential with the atmosphere - with some tank designs this is not uncommon.

Back in the day, before emissions, it was critical to use the correct fuel cap as, while some vehicles had separate air vents, some had them built into the fuel cap and fitting a sealed cap would cause the engine run badly before stalling and often collapsed tanks. One of our fleet vehicle models was a cronic problem when used on dirt/mud roads as the external vents would clog with dirt/mud - making sure all the OEM sealed caps were replaced with venting types solved it.

It is a very good question, though. My initial thought was a diesel type water separator, but not sure how well that would work with air, rather than diesel, as the moisture carring medium - perhaps a moisture/water trap as used in air lines would work? For the most part, not sure how significant it will be for ethanol containing fuels, as the fuel would be replaced regularly as it was consumed, but for methanol containing fuels it may be a very smart thing to do, especially in high humidity areas.

Comments from those with experience of this as an issue?

oh I'm not really familiar with how setups like that work, I just know that pressure builds up so much that you can see it bubbling from the o-ring under the sending unit. I believe that s13 gas caps do allow air to pass through if there is vacuum in the tank however.

I'm a mechanic and I deal with emissions problems on a daily basis. You have a purge line running from the canister to a purge valve which typically runs into the intake. The PCM takes the fuel tank pressure sensor reading into account, and opens the purge control solenoid, releasing pressure from the tank. This obviously means that since vacuum is being pulled on the tank when the solenoid is active, there is no pressure. Unfortunately I've deleted this system for purposes of simplicity. I really appreciate the great response, thank you.

The vent does need to allow vapor to pass in both directions. A common thing is to fill your tank, go home and park it outside in the sun. The gasoline came from an underground tank with a temperature of about 15* (C). Sitting in the sun on a hot day will raise the temp to 35 or even 40*, and potentially generate vapor which will generate pressure. The vent needs to be able to handle this.

It also needs to deal with the more obvious gasoline liquid being replaced with air as the car is driven. Filtered air is even better than atmospheric air.

One other thing that your old purge control system dealt with was disposing of the gasoline vapor. It's captured in the purge tank and then burned by the engine at startup. Since you've removed it, your garage (or whereever you've parked your car) will probably smell like gasoline.

I have designed a simple vapor/liquid separator that does a good job on all three issues. Google "II Much Fabrication fuel vents" if you want to know more. I sold thousands of them. I've sold that business, but I still retain the IP to make my own. PM me if you're interested in the design.

Hey John, just reading thru your reply and quiet interested in the II Much Fabrication fuel vents. Are these intended to be an inline vent run in the return line?

No, not in the return line, but connected to a vent port on the tank. That port connection needs to be somewhere at the top of the tank, and the vent needs to be located above. Some folks have had success adding a vent to the fill tube, but it's better if the vent port is located at the front middle of the tank.

Sorry to the original poster for jacking the thread, this is something i have struggled to get under control with my car the petrol fumes are ALWAYS present. The vent was non existent when I got the car and started to suck the tank in until it started to starve of fuel. Since I have had another new tank made however I don't use a carbon canister on the breather pipe. Breather here is also required to have a one way roll over valve fitted so could potentially give me the same problem as above with it sticking.

Any chance of a picture of one fitted just to see what you are referring to? Here is a picture of my tank installed in the back of my car. Do you think I could fit it to the slope on the right hand side of the tank (slight lean)?

You can see the breather I have at the moment right in the middle running down to the floor. 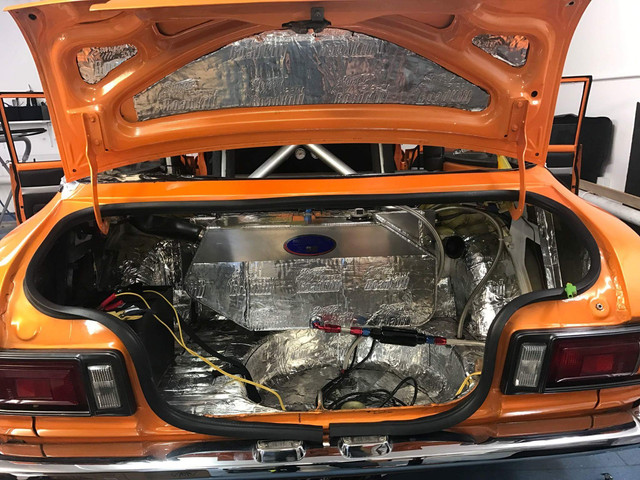 Have a look at an old blog entry of mine. Hope it helps.

Brian, it is very unlikely your check valve on the tank will, or even could, jam because of the way they're made.

If you haven't done so, any reason you can't simply run a vent line from the breather, through the floor, to underneath the vehicle?