Hi everyone, thought it was about time I said hello properly. Ive started poking about the forum recently and I like what I see. The forum seams like its got a fair bit of traction, and is also a freindly place so far. Which is an unusual thing in todays age of social media like FB. And it seams there are certainly some pretty clued up people on board. And I hope to become an active and particpating member of the community.

My name is Bram. I am an Auto electrician in Perth Western Australia. I am also a mad Subaru fanatic.

As an auto electrician i work mostly on industrial equipment, road surfacing machinery, drilling machinery, road transport, earth moving, mining and stationary machinery, aswell as passenger vehicles, and even aircraft on occaision. Basically anything with an engine in it. Being in warm WA, a large part of that is the HVAC side of things aswell.

In my spare time, to help fund my Subaru addiction, I do the electrical aspects of engine conversions and re-wires on performance and classic vehicles, and also a bit of electrical on recreational stuff like motorhomes, campers and 4wd setups etc.

Some of the projects I have done over the last few years include :

Top to bottom re-wire and conversion on a SR20 swapped KE20 Toyota Corolla.

And all manner of stuff like that. Link ECU is my go to when it comes to doing a conversion. But I am in no way a tuner as such. The extent of my tuning abilities is getting the vehicle to start so it can be driven onto a trailer and taken to a proper tuner. Although I would like to expand on that. My expertise is auto-electrical, and when I do a job for someone, they come to me for that aspect.

My own car is a Subaru Forester SG XT called "Yeti Sled". It is extensively modified, and is setup as a bit of a tarmac rally / circuit sprint car. Which is a bit of an unusual thing for a Forester chassis. When its running, its pretty competive with the common models you see in those type of events such as WRX and EVO. But that is probably in large part because it is so heavily modded. (I have an addiction to mods, its actually a real problem.) The problem with the car is its rarely running, probably because its so heavily modded haha.

The car is massively modified. (Did I say that already? Haha) Literally too much to list. Basically everything EXCEPT the shell is swapped/upgraded. I will do a more complete build thread on it at a later date. All of the spannering and fabrication work on the car is done by myself. Some of the main modifications are :

Big brakes, big diffs, big axels, carbon clutchs and carbon driveshafts. Spec C steering rack and control arms. All suspension is spherical joints. And pretty much every other bolt on part you can ever get. I even have a custom reproduction of Ken Blocks "HOONIGAN" lever for the hydraulic handbrake.

The car is getting a new engine build at the moment and that is what has drawn me to the forum. Ive gone a little crazy with the engine spec out this time around. Ive also decided to DIY the assembly. I love to do all the work myself, aswell as learn new skills. I self taught myself to TIG weld when i built the low mount turbo. And I plan to do the same with the engine build.

The engine is a EJ257. It has a CNC close deck insert, doweled main bearing tunnel and 14mm headstuds. It will be what they call a de-stroker, meaning it will be running a shorter stroke 75mm EJ20 crankshaft, with longer con-rods to make up the difference.

The crank, rods and pistons are all Manley. Im using the 9.8:1 Manley pistons, although the compression ratio should de-crease with the slightly smaller displacement from the shorter stroke. And Im also using thier premium rods in 2mm extra length.

The cylinder heads have had alot of work already. Including extensive porting, oversize valves, Be-Cu seats. Massive cams. The AVCS system is being totoally removed. I want the thing to rev high and go like stink.

I commisioned Roger Clark Motorsport to build me a 5 stage dry-sump system, which they are now selling as a complete kit after building mine first.

Its no doubt a very ambitious build for a rookie engine builder like myself. So i would certainly appreciate all the advice and knowledge I can get along the way. Hopefully I dont come across as too cocky. Its not how I am in person, but it can seam that way online. 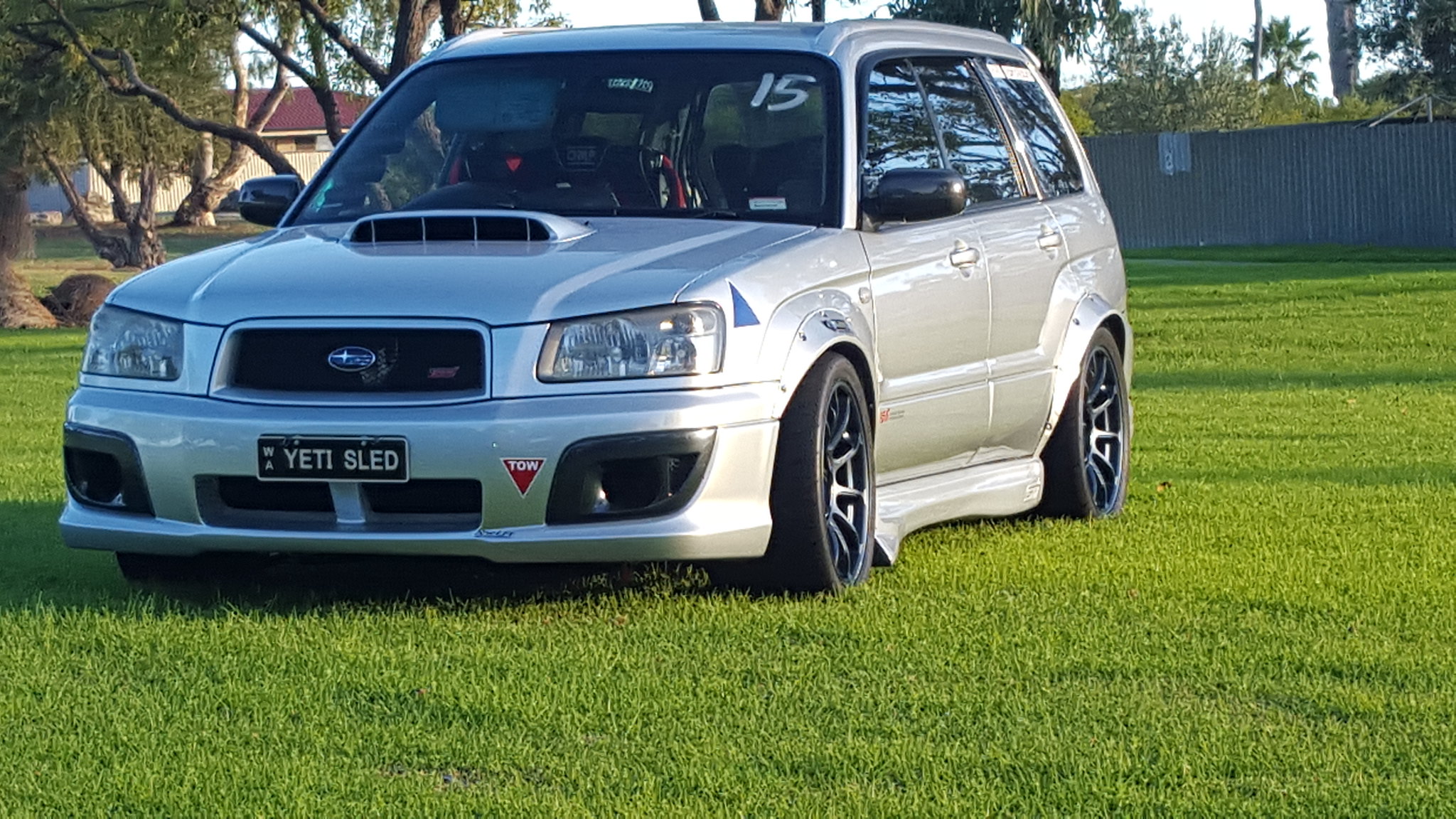 I look pretty chuffed in this photo because I placed 4th outright for the day out of about 60 cars. Not a bad effort for a Forester. 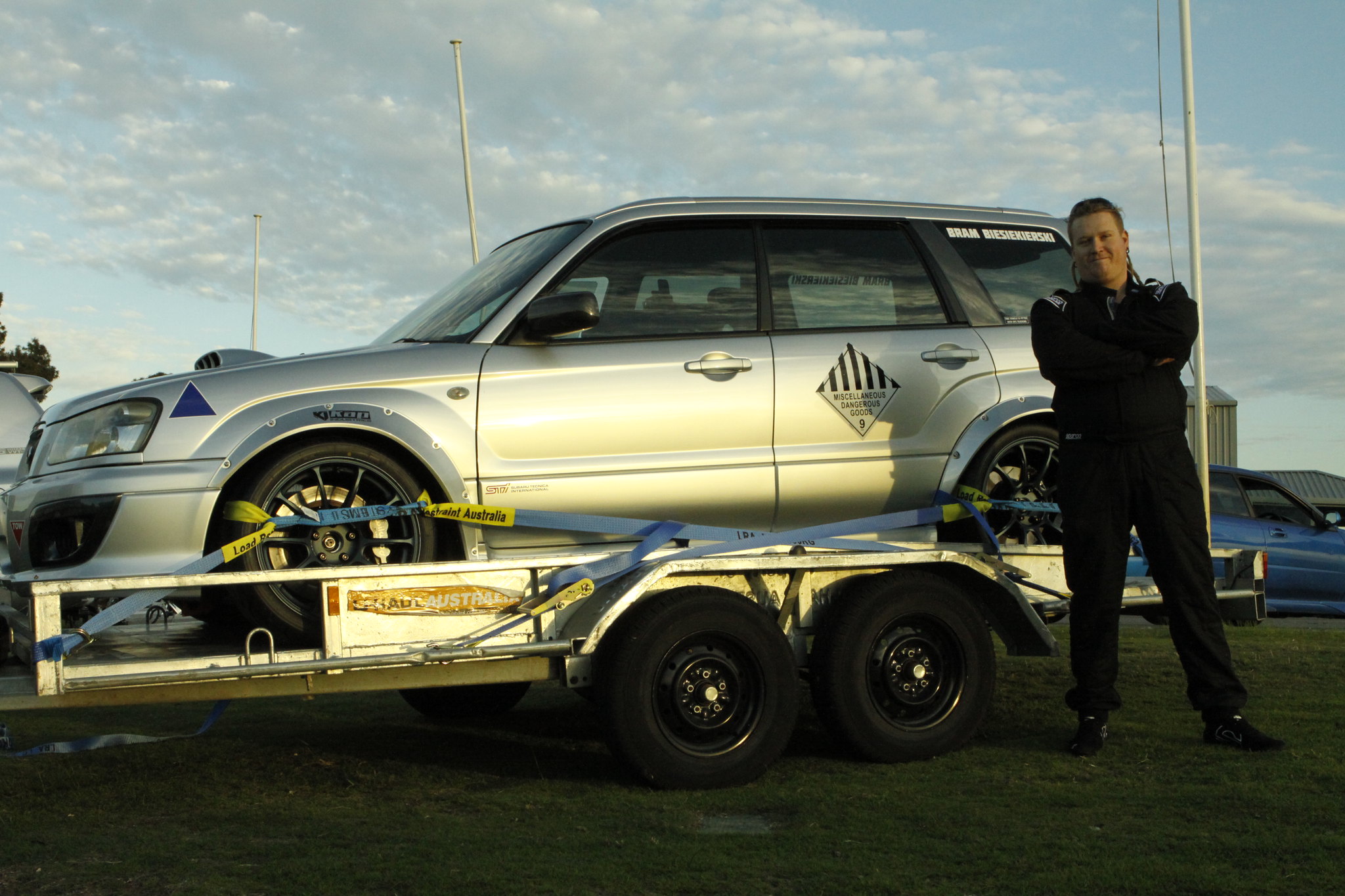 That is a mighty impressive looking build, do you have any video's of it going?

This was when it was last running. It actually done a rod bearing a few laps after this video. But I had clocked the fastest time out of the WRX club who was hosting the night.

I put up quite a few videos on youtuve of the car. I tag them all with "yeti sled"

This was one of my best runs from a few years ago at the WA State Sprint Championship. This was on the same day as the photo with the car on the trailer was taken. This was actually the 3rd fastest run of the entire day. But my averages from my other runs bumped me into 4th place. So close to a podium finish.

The car wasnt quite as hectic as it was in the video above. I was running a Dom 2.5 (like a stock location 3071) and top mount still.