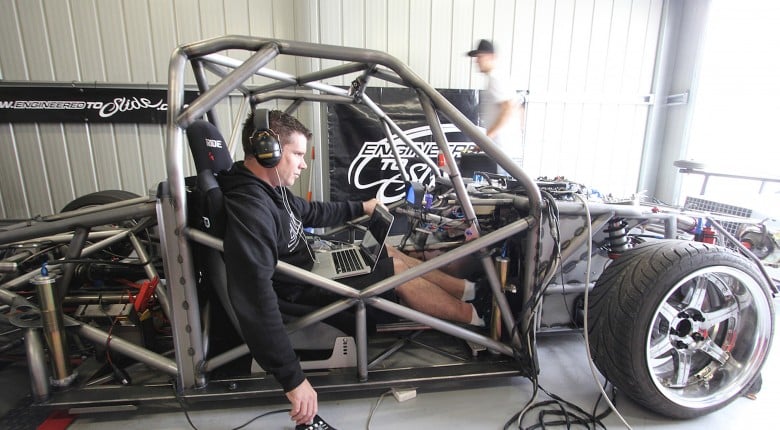 If you’re building a performance street car or race car, at some point you’re probably going to need to use a dyno if you want to get the most out of all your shiny expensive parts. It wasn’t too many years ago that dynos were almost the exclusive realm of well-funded race teams. They were expensive, rare and difficult to use, so that really limited their usefulness in the street performance market. These days though, the dyno market is bustling, and as tuners we have access to a wide range of quality, accurate dyno equipment at a fraction of what it cost back in the early to mid-2000s.

In this article: Dyno 101 | The Truth About Dynos | Dynos Blow Up Engines | Power Figures | Flywheel vs Wheel Power | A Dyno Is The Only Way 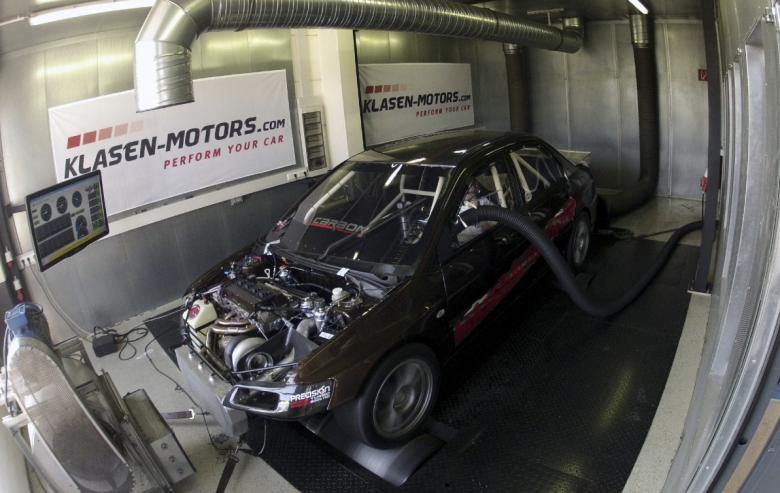 Dynos have an unenviable reputation – just search ‘Dyno Fail’ on YouTube and you’ll get the idea. For some, they are the source of bragging rights, but for others they are the destroyer of hopes, dreams and engines. Before blaming the dyno though, let’s get a better understanding of what you’re dealing with. This post will sort some fact from fiction and give you the information you need to know before heading to a dyno shop.

Let’s start with what a dyno actually is…

A dyno, or dynamometer as it’s also known, is a device that we can use to apply a load to an engine to simulate how the engine operates when we drive on the road or track. Think of it like this – if we jacked the drive wheels of a car off the ground and tried to drive the car, there would be no resistance on the engine and even a moderate amount of throttle would have the engine sitting on the rev limit. The dyno provides a load to control the engine RPM, so you could think of it like a big brake. 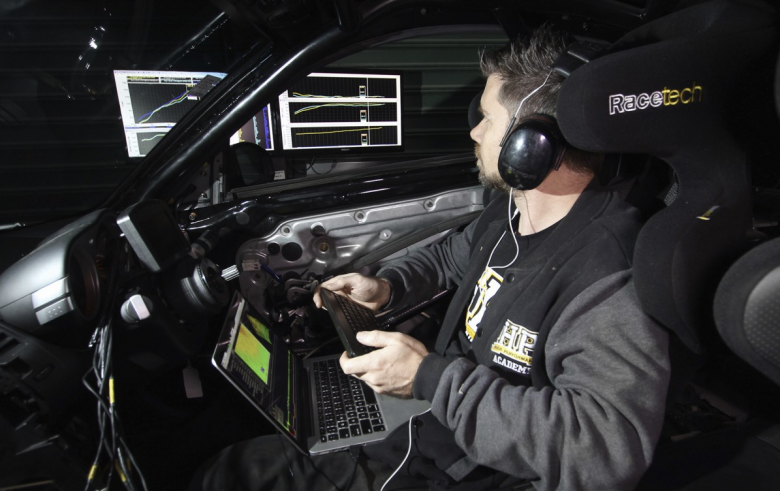 Being able to apply an accurately controlled load is important, but at the same time a dyno will log data while we’re running the engine. RPM, torque, air/fuel ratio and boost pressure are some of the key channels we want to monitor, although the options are almost unlimited. This lets us perform a ramp run on the dyno, check the engine’s performance, and make decisions about tuning changes based on the logged data.

From the tuner’s perspective, it’s all about quantifying the results of a change. This might be a tuning change such as altering the fuel, ignition timing or boost, or it may be measuring the result of changing a part like a manifold, camshaft or exhaust. Either way, we need accurate data so that we know if the change we made was an improvement or a disaster. 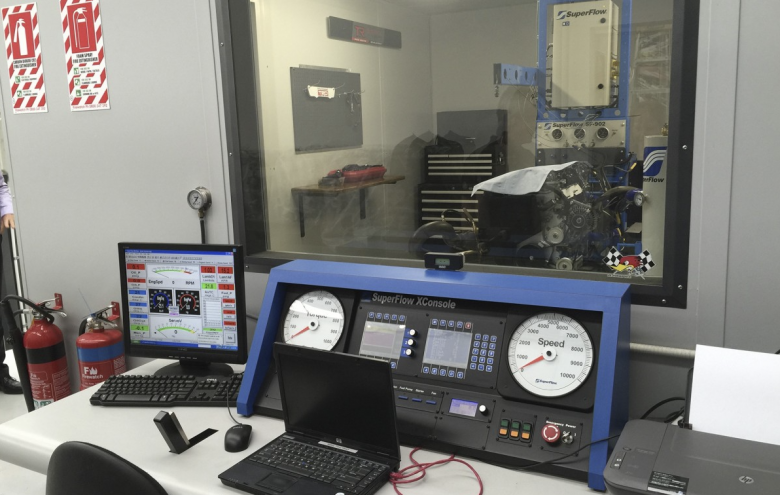 Dynos can be broken down into two main types: engine dynos and chassis dynos. Engine dynos require the engine to be removed from the car and fitted to a dyno fixture for tuning. A chassis dyno on the other hand is what we are probably more familiar with these days, where the engine is tuned while it’s still fitted to the car.

An engine dyno is often a better option for development work as it’s very easy to work around the engine and parts can be quickly swapped and tested. This is why engine dynos are the dyno of choice for professional race teams, engine builders and OEMs. For street and amateur level motorsport though, the chassis dyno is a much more convenient and cost effective option. It’s the development in chassis dynos particularly that has made dyno tuning an accessible and affordable option for those of us on the street. 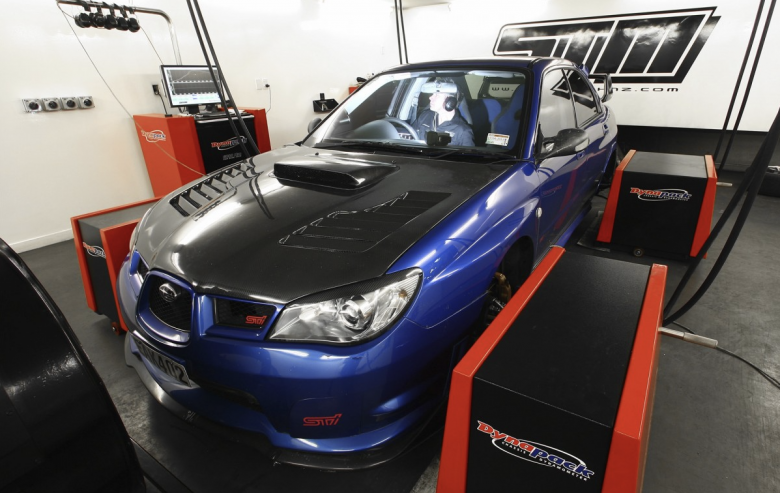 A rolling road dyno is probably what most people have in their mind when they think of a chassis dyno. These are still by far the most common, however manufacturers such as Dynapack, Mainline and Rototest also produce hub dynos where the wheels are removed from the car and the car is physically bolted to the dyno. The advantage of a hub dyno over a rolling road is that wheel spin is eliminated, which is handy for very high-powered engines. 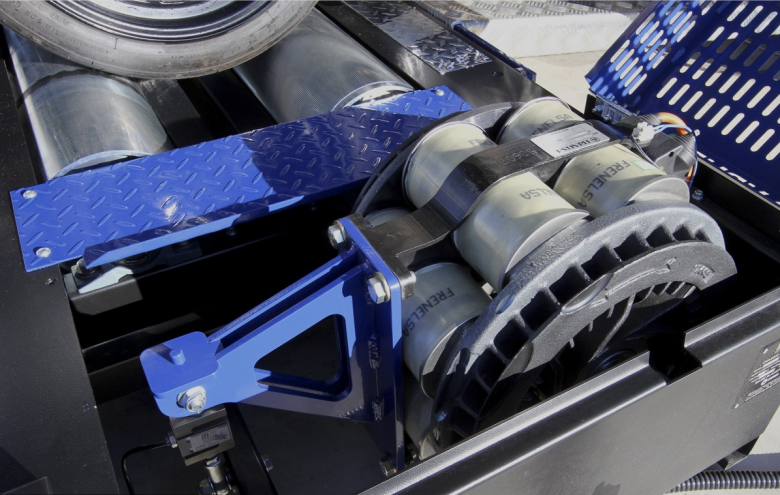 The most common methods used by the dyno to apply load or braking force, include eddy current retarders, a water brake or a hydraulic brake – often referred to as power absorbers. Dynos incorporating a power absorber can accurately control and vary the load allowing the engine to be tuned in ‘steady state’. This is where the dyno holds the RPM steady regardless of the throttle position – something essential for properly mapping an aftermarket ECU.

These braked dynos that I’ve just mentioned shouldn’t be confused with an inertia dyno which uses no brake or power absorber. Inertia dynos use a single roller with a large mass, and knowing the mass, the diameter of the roller, and the rate it is accelerated at, allows the power to be calculated. Since this type of dyno has no brake though, it’s only really useful for tuning at wide-open throttle. So, great for a drag car but less useful for circuit or street cars. 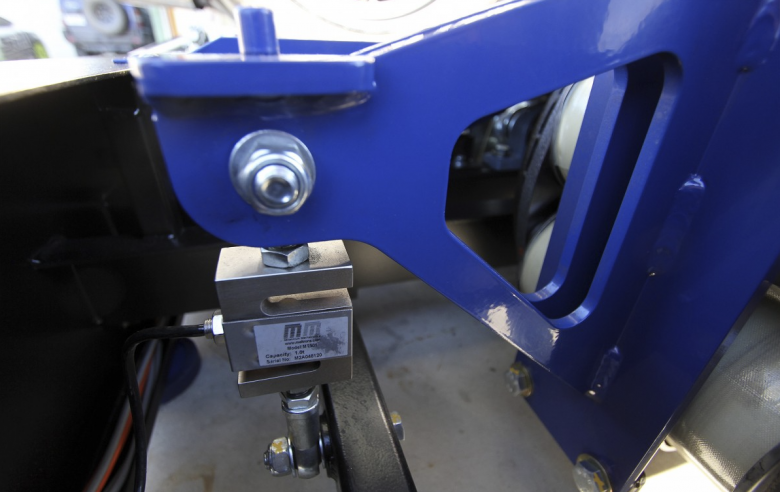 The Truth About Dynos

Most people assume that the dyno is there to measure engine power but this isn’t quite the case. The dyno doesn’t measure power, it calculates it, and to do this the dyno needs to know the amount of torque being produced as well as rpm. A dyno will often measure torque using a load cell as pictured. Once the dyno knows the torque and rpm, it can calculate the power.

Since there is so much misunderstanding around dynos, so here are a few more common misconceptions I’ll clear up: 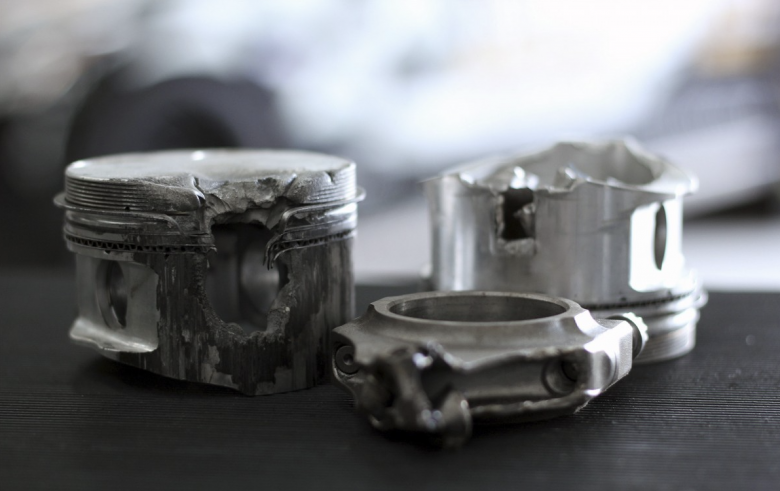 This is probably the most common myth I’ve heard in 15 years as a professional engine tuner. Many years ago there may have even been some truth in this as dyno technology and control systems weren’t as advanced, but these days though a modern dyno can perform a full ramp test through an engine’s RPM range in as little as 8-10 seconds. Following this, the engine will then be brought back to idle while the data is analysed and decisions are made.

There is no more load or stress placed on the engine than if you were to drive it at full throttle on the road. In fact, with all of the engine’s parameters being monitored, usually, it’s much safer. 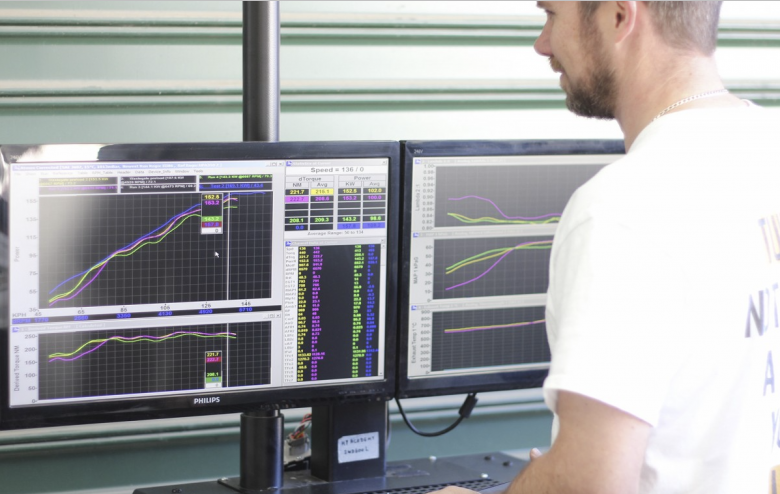 Everyone loves power figures and when it comes to dyno sheets, the bigger the better. There will always be a steady stream of keyboard warriors stroking their ego on various forums by posting up their latest dyno sheet, and next comes the inevitable battle about which dyno reads high or low, and how does that compare to ‘X’ brand of dyno. The reality is that every brand of dyno will produce a different reading.

The dyno should be considered as a comparative tool only. Personally, I don’t care if a dyno reads in kilowatts, horsepower or mega-ponies. What I’m interested in is how much power I had when I started and what I ended up with when I was finished. This is the true value of a dyno from a tuner’s perspective and trying to compare numbers between different dynos is pointless. This also means when you are developing or modifying your car, you always want to do your testing on the same dyno. 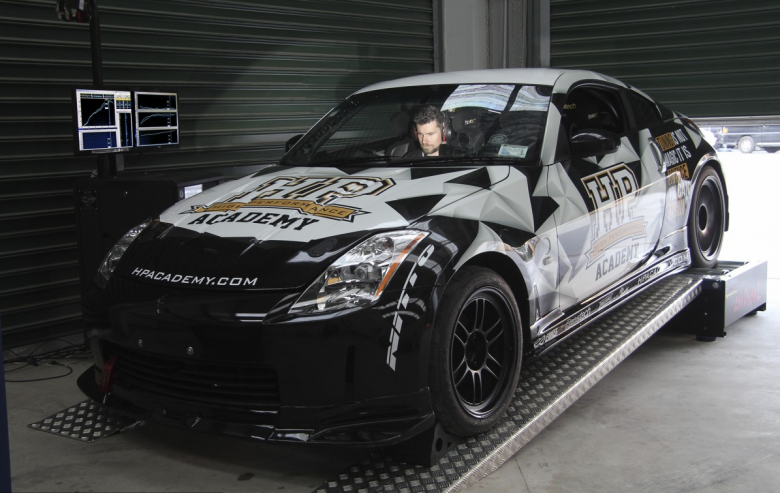 A couple of decades back, if you wanted to run your engine on a dyno, an engine dyno was your only option and these dynos return a reading of flywheel power. These days though, we are more likely to use a chassis dyno which measures power at the drive wheels. With a gearbox, differential and perhaps a transfer case between the flywheel and the wheels, the wheel power value will always be lower than the flywheel figure.

Since everyone wants bigger numbers, the question always is: ‘What’s it make at the flywheel?’ This is harder to answer than you’d think. First of all, it will depend on the drivetrain. An automatic transmission is a little more power-hungry than a manual, and a four-wheel drive will tend to sap more power than a two-wheel drive. Secondly, we need to think about how this power loss is dealt with. Is the power loss constant, or is it a percentage? And what happens to the power loss when you increase the engine power?

In reality, the answer doesn’t matter – the only way to get a true answer is to remove the engine and run it on an engine dyno. Beyond that, forget about bragging rights and use the dyno as it was meant to be used: a comparative tool. 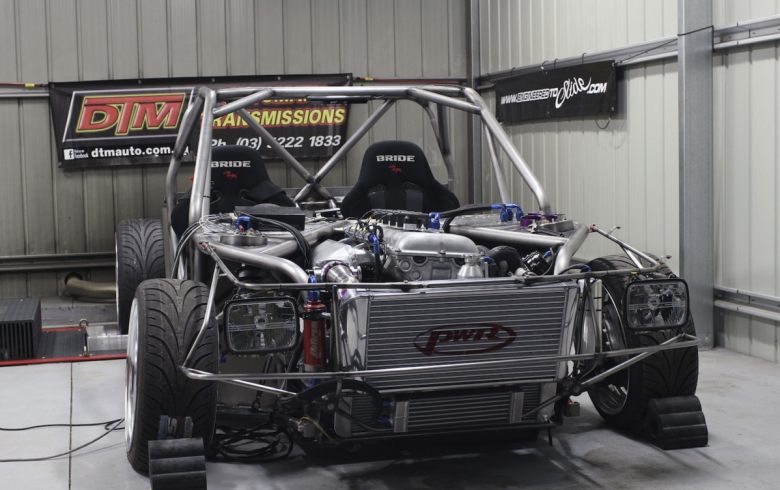 A Dyno Is The Only Way To Tune

A dyno is an important tool for any tuner as it gives us feedback about the tuning changes we are making. It’s also important to understand its limitations though. For example, it’s hard to replicate the sort of airflow on the dyno that we could expect at 200km/h. Since we don’t drive or race cars on a dyno, what really matters is the engine’s performance on the road or track, and this is why I’m a big advocate of checking and confirming the tune out in the real world. 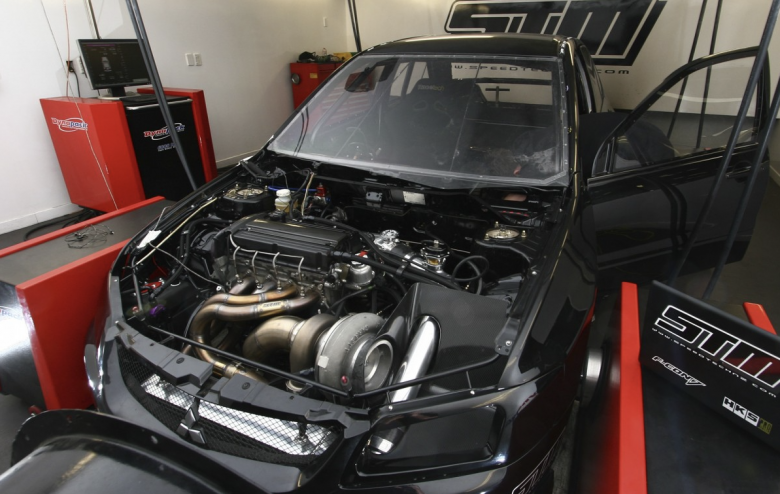 So there you have it – I hope that’s cleared up some of the misunderstanding surrounding dynos and given you some valuable info for your next tuning session and you're now ready to read my 5 Top Tips For Your Dyno Tuning Session.

As always, if you’ve still got questions, ask them on our members only forum and I'll do my best to help you out.