Home > Technical Articles > What is E85? 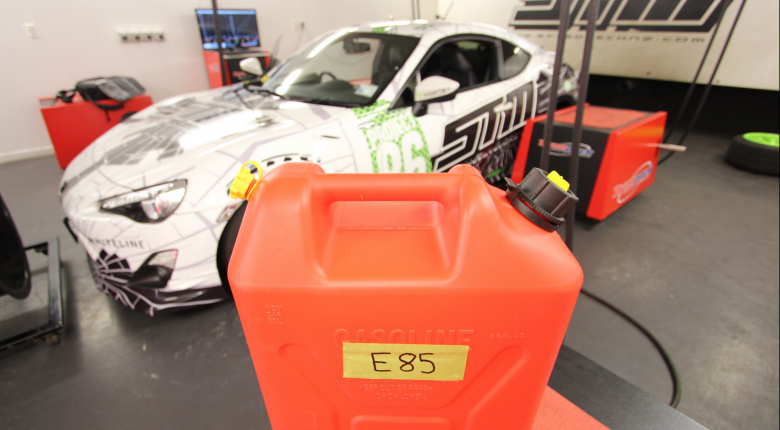 Unless you’ve been hiding under a rock, you’ll probably know that E85 is a fuel containing 85 per cent ethanol and 15 per cent gasoline. E85 continues to increase in popularity on the merits of sustainability and reduced emissions when compared to pump gasoline. That’s (allegedly) great for the environment, but if you’re interested in performance the real value of E85 is that it provides race-fuel properties at bargain basement prices. It’s quite possible to see your engine power literally double in some cases when switching from pump gas to E85. Obviously, there’s a bit more to consider than just the fuel, but stay with me and we’ll get to the good bits.

In this article: How does E85 make more power? | Can you fill up at the pump? | Care and maintenance | Flex Fuel? | Upgrade Requirements | Tuning on E85 | Only for boosted engines? | Special Precautions 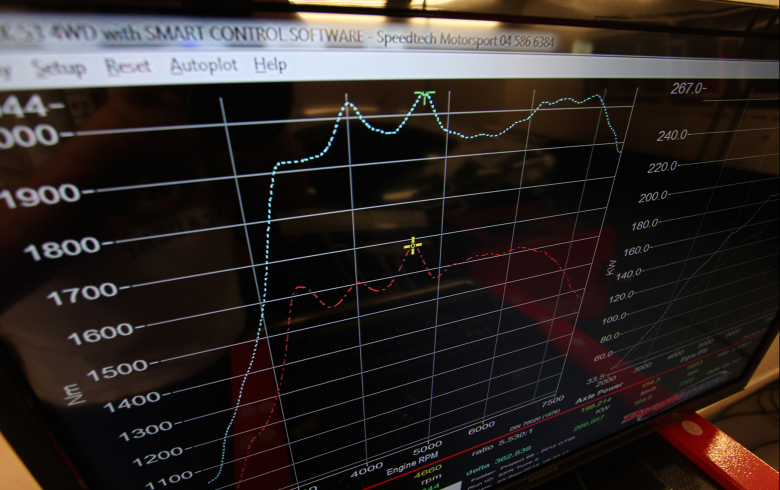 How does E85 make more power? 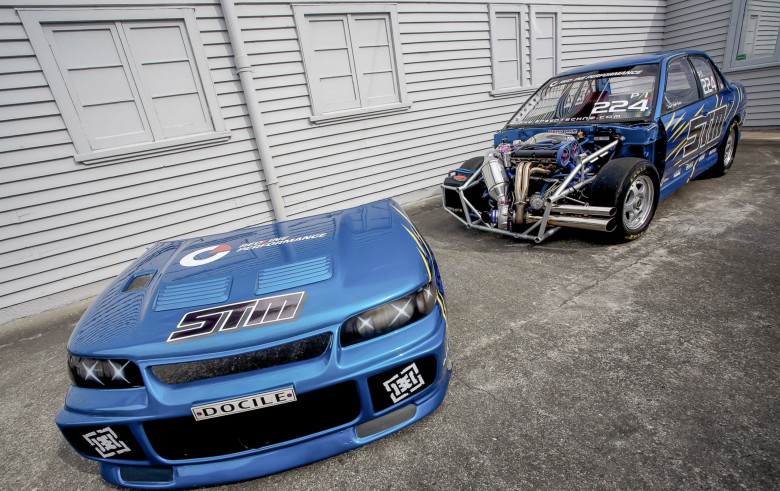 E85 also has a very high ‘latent heat of evaporation’. If you failed chemistry, don’t stress. In plain English this means that when E85 is injected into the engine, it goes through a phase change from liquid to gas and during this process it absorbs a lot of heat from the intake charge. A colder intake charge is denser and improves power, but also has the effect of making the engine less prone to detonation. 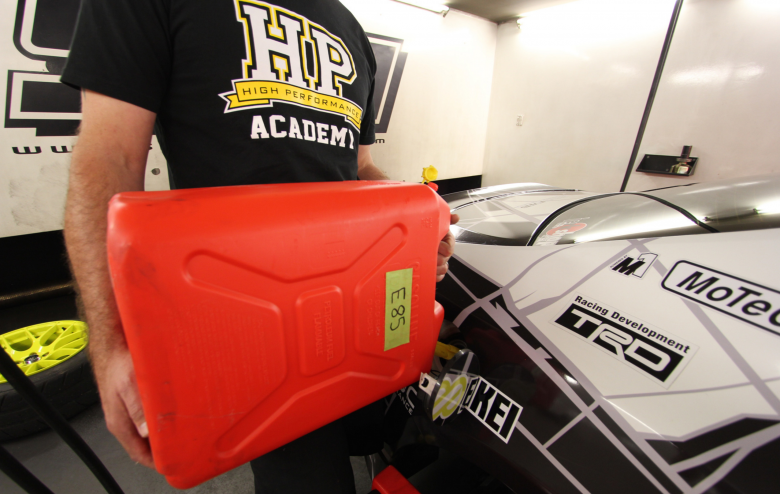 Can you fill up at the pump?

Unless you have a Flex Fuel capable vehicle, the answer is no. Normal gasoline has a stoichiometric air fuel ratio of 14.7:1, while E85 is 9.8:1. ‘Stoichiometric’ is a chemical term that refers to the required ratio of fuel and air for complete combustion. Again, if you failed chemistry this means that on pump gas we need 14.7 parts air to mix with one part fuel. On E85 however, we now mix one part fuel to 9.8 parts air. So on E85 the air/fuel ratio needs to be significantly richer, which means it contains a larger volume of fuel. To achieve this we need to inject around 35 per cent more fuel to mix with the same volume of air when we switch from gasoline to E85. In short, your car needs to be tuned to run correctly on E85. 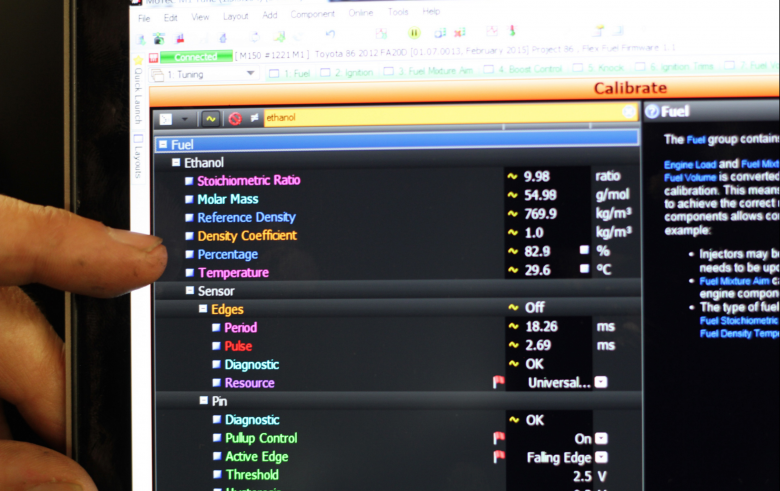 Our MoTeC M150 ECU pictured can monitor the ethanol content and then automatically account for the changing fuel properties including stoichiometric ratio and fuel density thanks to an ethanol content sensor. 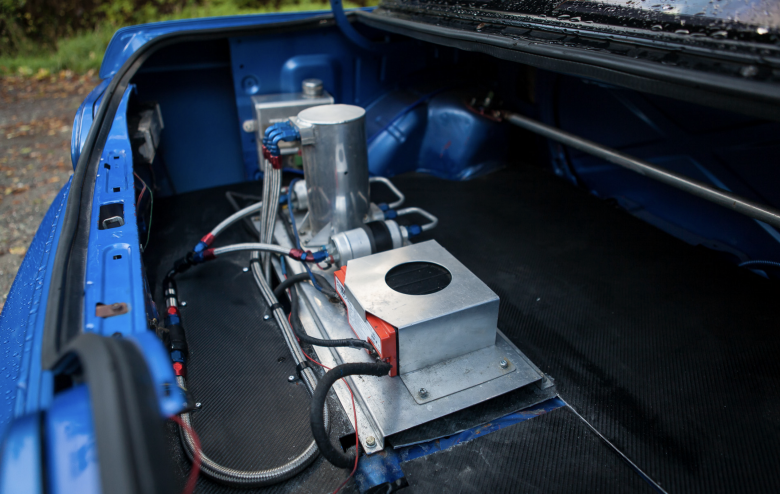 As we just saw, even just supporting the same amount of power you were making on pump gasoline will need around 35 per cent more. Considering most people will be changing to E85 to improve power the actual fuel demands can be much higher than this. This can be a problem if your fuel system isn’t built with E85 in mind. In particular, larger injectors and a larger fuel pump are usually a necessity. In high-power applications multiple pumps and dual sets of injectors may be required. It’s also worth mentioning that since you’re burning more E85, your fuel economy will take a hit. 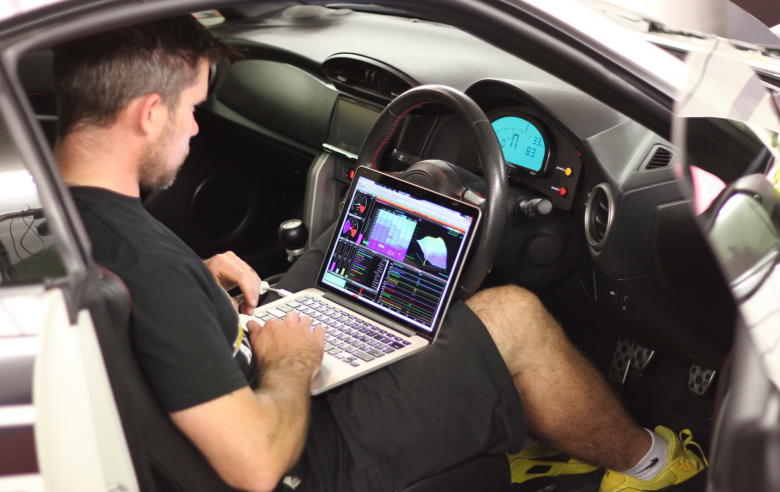 E85 isn’t all plain sailing and does require some care. For a start E85 is very hygroscopic, which means that it will absorb moisture from the atmosphere. This moisture can cause corrosion of your fuel pump and injectors leading to some serious issues down the track. How quickly E85 will absorb moisture depends on the humidity, but if you aren’t using the car regularly it’s always best to drain the E85 and run some gasoline through the system. 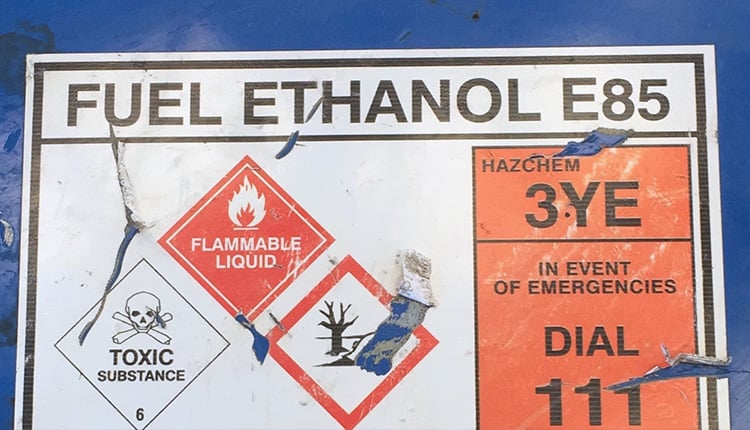 Another concern is the changing ethanol content of pump E85. While it’s called E85, the actual fuel specification allows ethanol content to vary anywhere from 51 per cent to 85 per cent. Particularly in colder regions, the gasoline percentage is increased to help increase the fuel’s volatility which aids cold weather starting. While it’s great to have a car that starts when there’s snow on the ground, if your engine is tuned for 85 per cent ethanol and all of a sudden you have a tank with 51 per cent ethanol, your tune will be off the mark with potentially dangerous results. 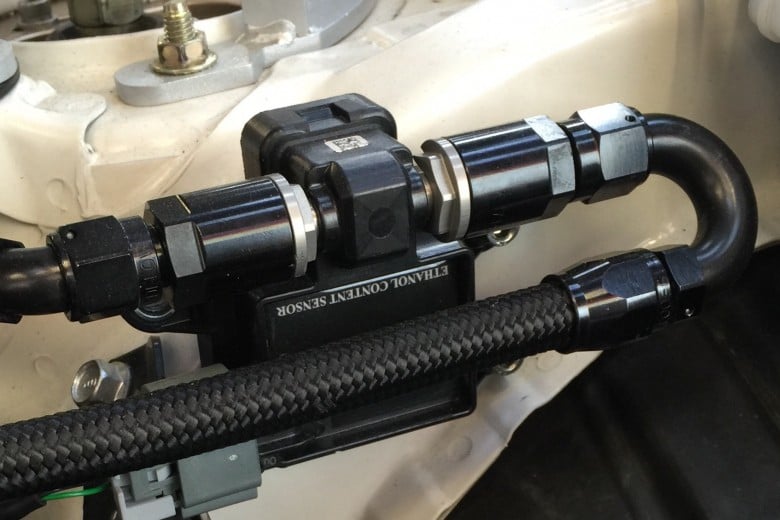 Flex Fuel is common on many newer vehicles and this system uses an ethanol content sensor to tell the ECU the percentage of ethanol in the fuel. With this system you can run a car on pump gasoline, E85 or any mixture of the two and the ECU takes care of the necessary changes. Flex Fuel functions are also available in many aftermarket ECUs and this can allow you to take advantage of the same technology for your own car. For those without regular access to E85 this gives the freedom to swap between fuels without visiting a tuner or breaking out the laptop each time. We mounted a Continental ethanol content sensor to the strut tower of our Toyota 86 and plumbed it into the fuel feed line using some AN adaptors. The ethanol content sensor can also accommodate tank-to-tank fluctuations in ethanol content and ensure safety for those running dedicated E85. 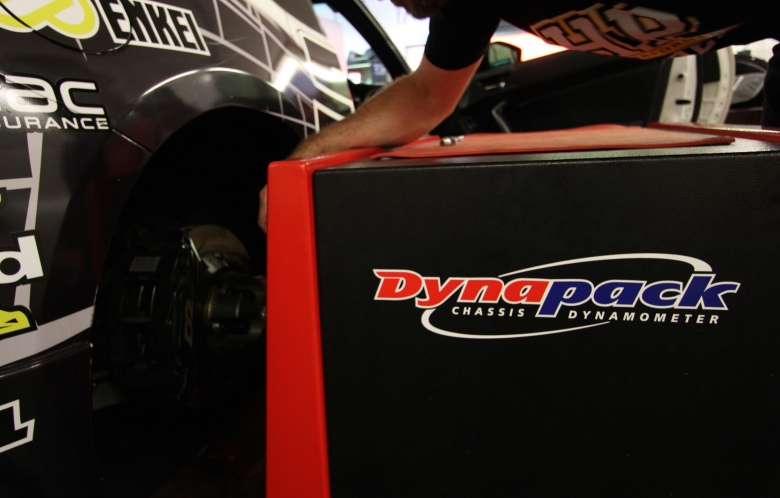 Just tipping E85 into the tank and retuning the ECU to deliver the correct volume of fuel isn’t going to really harness the power potential of E85. If you want to take advantage of the fuel you’re going to need to add some ignition advance, increase the boost pressure, or both. 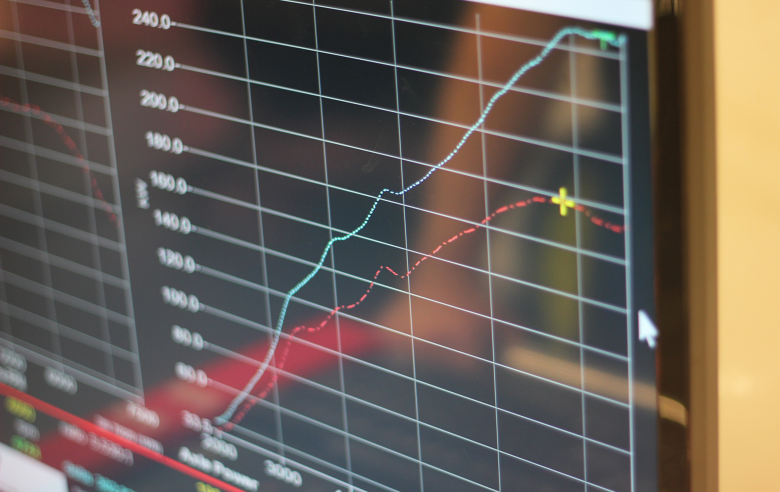 We did some testing on our turbocharged Toyota 86 and optimising the tune in the MoTeC M150 ECU netted an increase in power from the 198kW (265hp) the car made on pump gas to 267kW (358hp) at the rear wheels. Even with the high 12.5:1 compression of the FA20 engine, E85 allowed us to increase the boost from 7.0psi to 9.5 psi with no detonation. The only thing stopping us going further was the stock internals and a little mechanical sympathy. 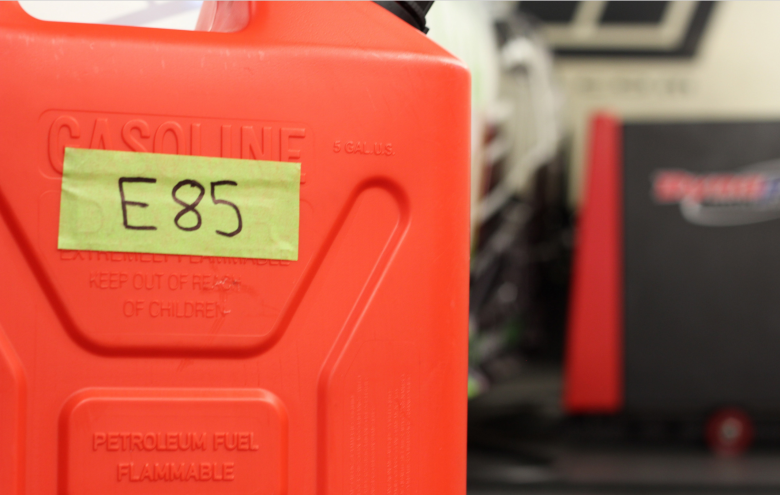 Only for boosted engines?

The advantages E85 offers play out perfectly for any engine that is very sensitive to knock or detonation on pump gas, which is why E85 lends itself so well to boosted engines. So how about if you’re naturally aspirated and you aren’t really being effected by knock on pump gas? Well the news is still good! Even without taking advantage of the knock suppressing characteristics of E85, we can still expect to pick up around 5 per cent power and torque from the switch to E85. 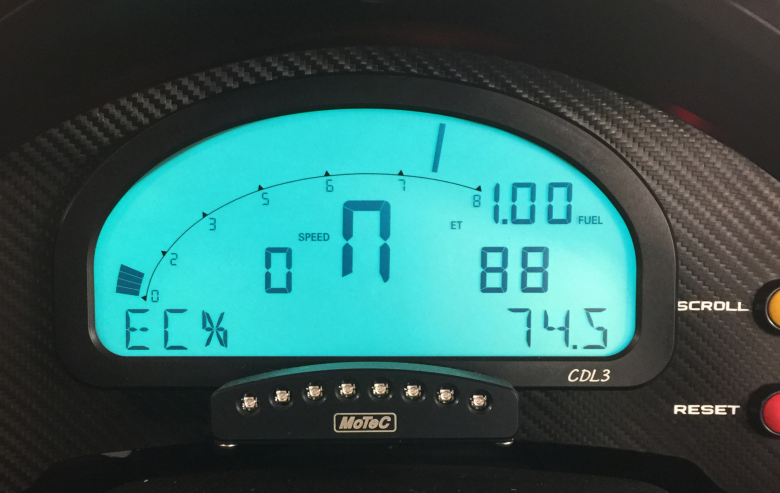 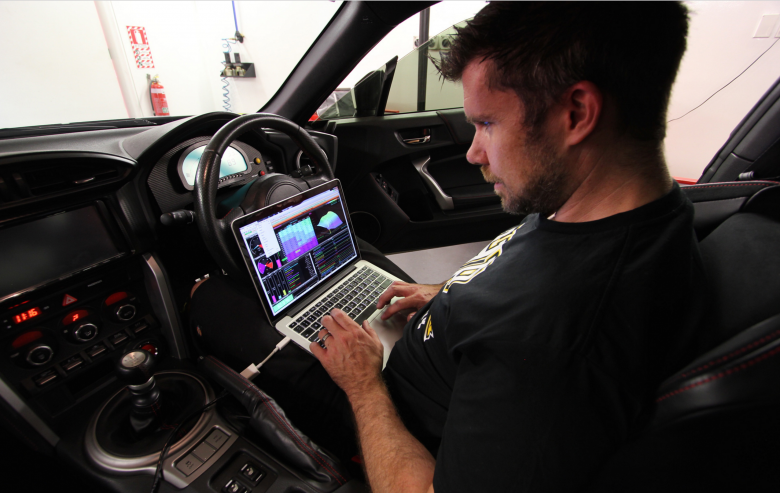 If you’re looking for more performance out of your car, tuning to suit E85 can provide impressive results for a modest investment. But it does demand some respect to ensure good performance and reliability. Hopefully I’ve been able to give you a better understanding of this fuel and its benefits, but if you have any further E85-related questions, or you’d like some advice on your fuel setup, ask them on our members only forum and I'll do my best to help you out.

Want to learn more about tuning?

We've helped 30,000 people just like you learn the science of tuning and apply it to their own projects.