Home > Technical Articles > What Is The ULTIMATE Wet Sump Setup?

What Is The ULTIMATE Wet Sump Setup? 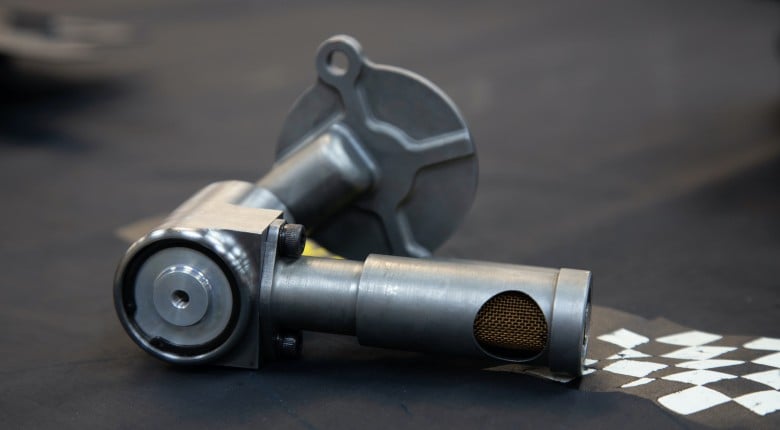 With competition cars, when you start modifying the suspension and upgrading to stickier, wider tyres, the car’s ability to pull higher lateral G forces during cornering, as well as longitudinally under braking and acceleration begins to increase. The issue here is that the car’s factory oiling system isn’t designed to cope with this and if the oil sloshes away from the oil pickup in the sump, you have the potential for the pickup to draw in air which is an almost direct route to a bearing failure.

To solve this, you could change to a dry sump system however the reality for most people at the enthusiast level is their budget does not allow this. In this article, you will see that it is possible to run an effective wet sump system by modifying it to stop oil sloshing away from the pickups under cornering, accelerating and braking forces.

In this article: What Is Wrong With A Factory Wet Sump System Though? | Dry Sump Solution | Modifying Your Wet Sump | Oil Temperature | Oil Grade | Conclusion 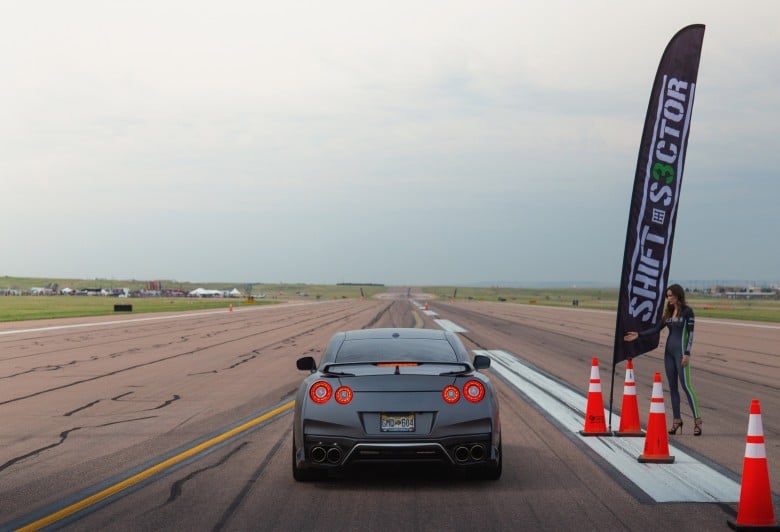 What Is Wrong With A Factory Wet Sump System Though?

As mentioned, it is under braking, acceleration and cornering that a factory wet sump system can pose issues. The below data is from one of our development cars showing engine speed in purple, throttle position in green, lateral g force in blue and engine oil pressure in yellow. You will naturally see a fluctuation in oil pressure compared to RPM, about 10 psi per 1000 RPM as a general rule of thumb.

The concerning part of this data log is where you can see a drop in oil pressure during cornering indicating oil surge and at one point at 4600 RPM, the oil pressure dropped to 27 psi. In this example, the driver was off the throttle at each of the oil surge points which meant that although there were high lateral G forces, the damage was avoided since there was minimal load on the bearings. Depending on the layout of your track however, this will not always be the case such as when you are navigating a long corner. 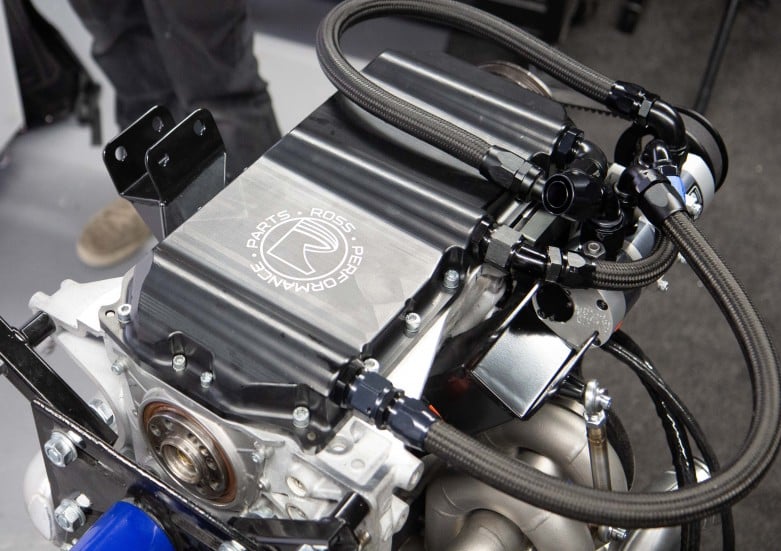 If you’ve got a big budget and are looking for a top of the line solution, your best option is a dry sump system which removes all of the oil from your sump into an external oil reservoir. Looking at the layout of a dry sump system, in the below image you can see the dry sump pump on the left which is driven by the belt attached to the drive hub bolted to the front of the crankshaft on the right. 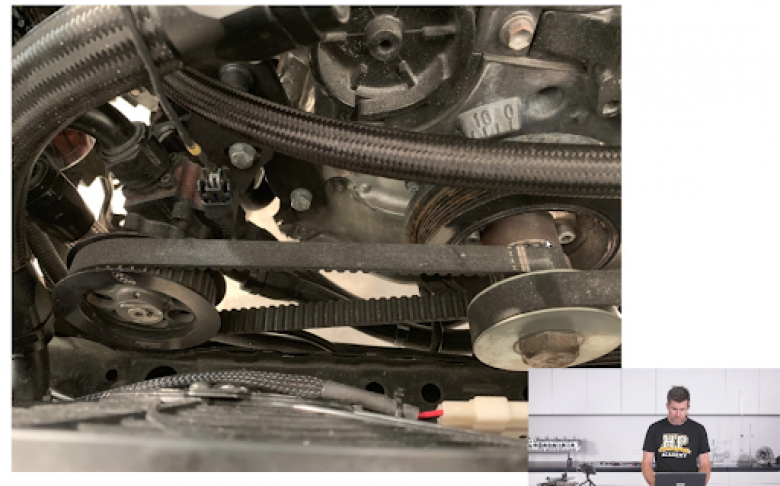 Next, in the interior of the car, you can see the dry sump tank to which the oil is evacuated. The important thing to note about this is the tall, narrow shape of the tank which means there will always be a good volume of oil directly above the oil pickup at the bottom, allowing for constant oil supply. 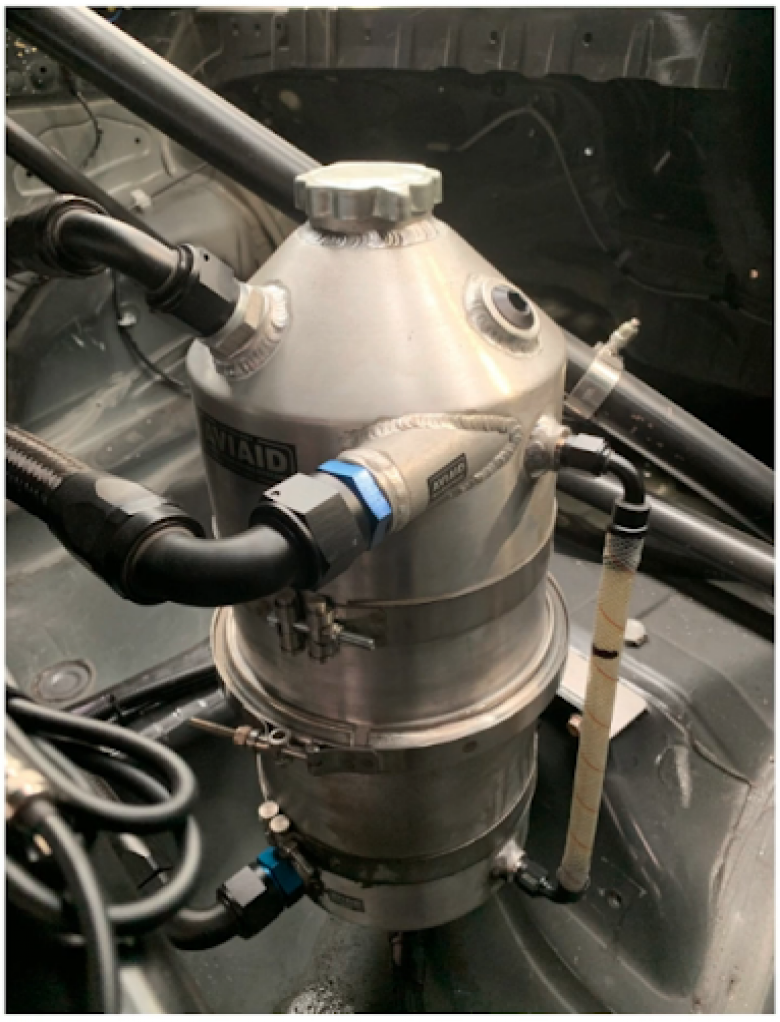 Finally, the oil needs to have any air removed and then be pumped back into the engine which is done by the pressure stage at the back of the pump as shown below. The two scavenge stages next to this are what draws the oil and air out of the sump into the tank that was previously discussed. 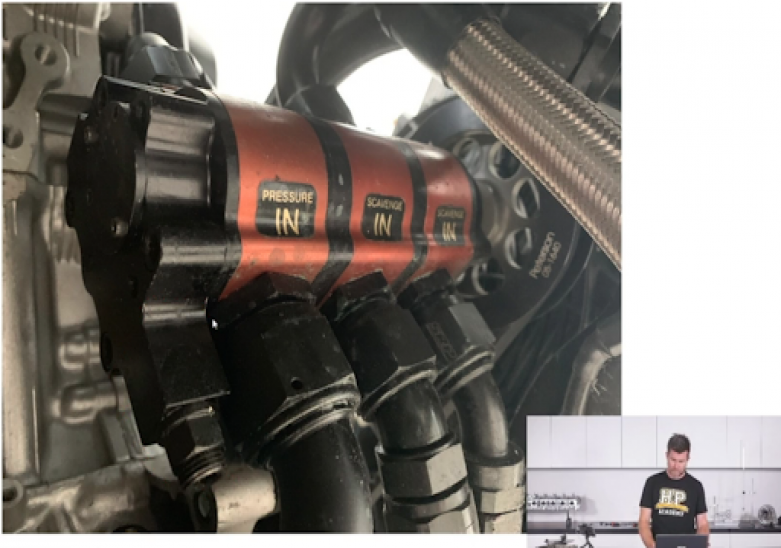 The dry sump system brings some great benefits however there can be a lot of complexity and cost involved, with it being easy to spend USD$3000-4000 on the parts alone before you even consider running the system and fitting it to your car. This will be beyond the scope of most people, especially at the enthusiast level, so what can you do instead? 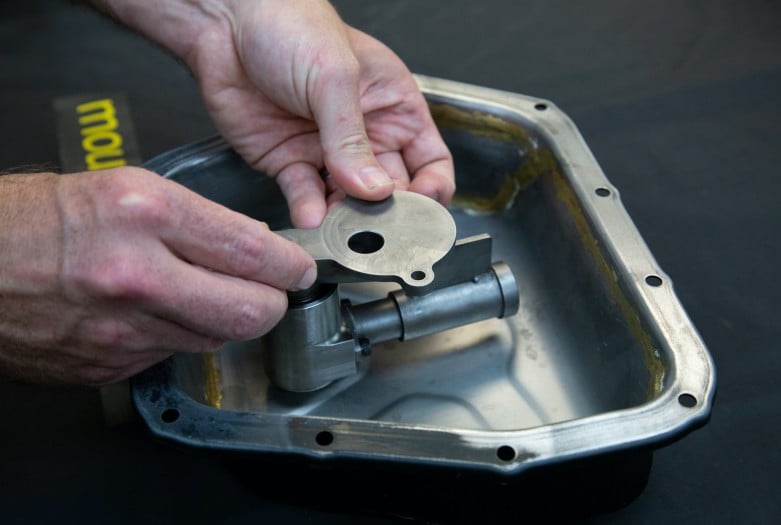 If you can’t afford to install a dry sump system fear not, you can still alleviate oil surge by modifying your wet sump system to trap oil around the pickup and stop it sloshing away under high lateral and longitudinal G forces. In addition to this, you may also want to add oil capacity to help keep the right amount of oil where it needs to be and improve the oil return. Especially in certain engines such as the Nissan RB series when the engine is operating at sustained high RPM, it is possible for the oil to be pumped into the cylinder head faster than it can be returned to the sump. This can be improved by fitting external drains from the cylinder head back into the sump or drilling out the oil return galleries. 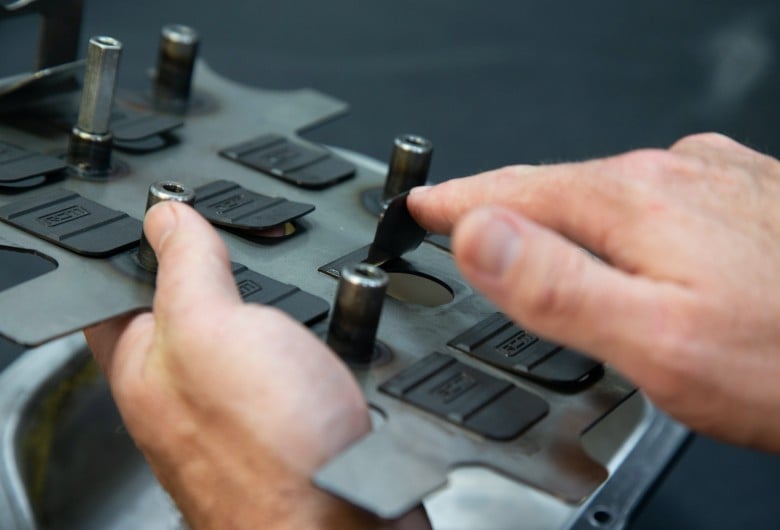 There are a lot of aftermarket sumps available off the shelf with wings to increase capacity like that used with our Toyota 86. This sump was designed to fit tightly around the headers and also sits a bit deeper than factory with the rest of the sump cut out so it has full access to the winged section. When fitting a deeper sump, you need to keep in mind the clearance to the ground as it’s not a good idea to have your sump as the lowest point of your car since this leaves no protection from any potential impact. 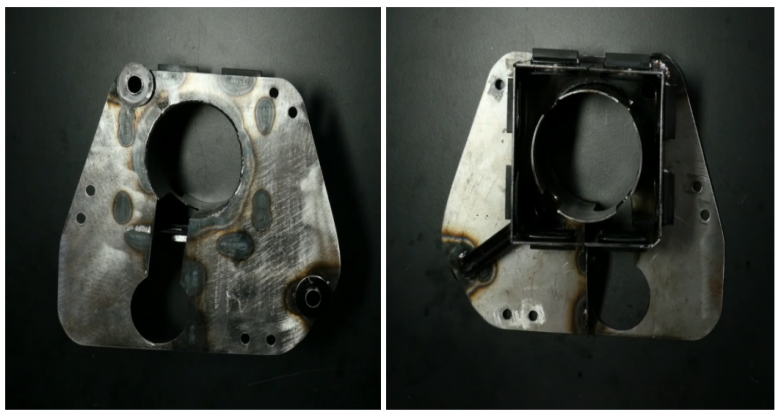 Increasing the oil capacity alone is not going to be much help with oil surge as there is currently nothing to stop the oil sloshing away from the pickup. This is where our baffle box comes in which is comprised of a few laser cut steel plates bolted into the sump. The factory oil returns from the FA20 engine have been incorporated and routed to return the oil directly to the centre of the baffle box which also has a cut out to house the oil pickup. On the underside view, you can see the inner cylinder which sits on the bottom of the sump with four cut out slots to allow the oil to enter but are positioned so that the oil will not be able to to move left/right during cornering or fore/aft during braking and acceleration. Outside of that is a box which includes some little rubber trap doors. 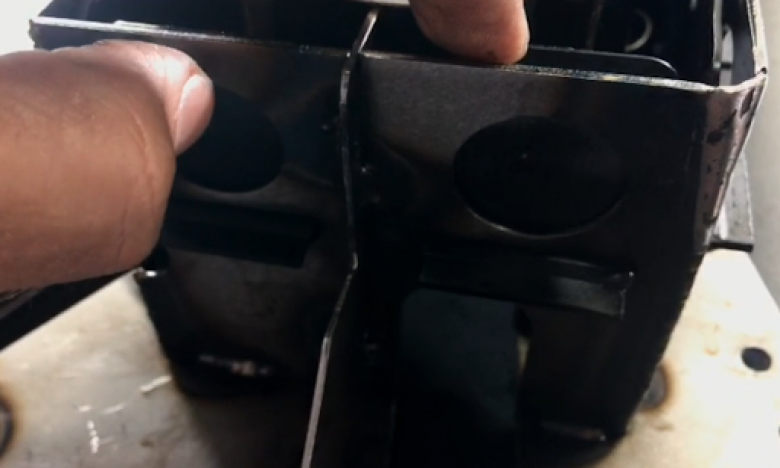 The rubber trap doors are on the inside of the outer box covering round holes and are designed to allow the oil to flow into the baffle box but not slosh back out as the pressure of the oil trying to escape will force the trap doors shut. These trap doors are positively located into a laser cut slot so they won’t be able to work their way free. They are cheaply and readily available but this baffle box arrangement does require a certain amount of effort to make so it won’t be the right solution for everyone. 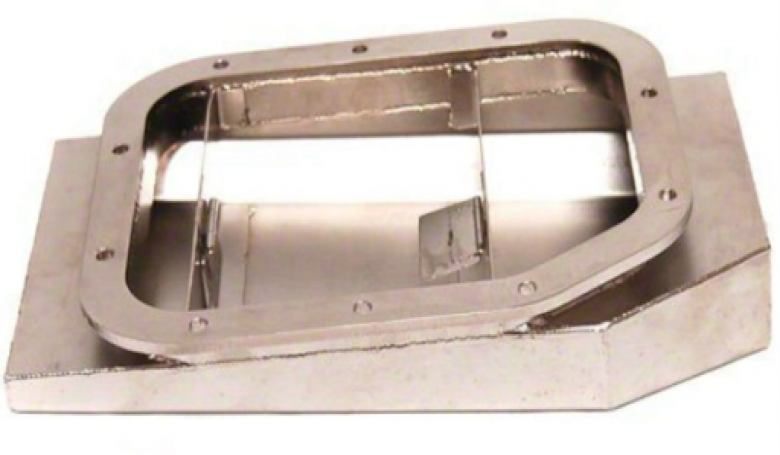 Another option is something like this Tomei sump that is installed on our SR20 which just like our Toyota 86 sump, also has wings however it does not have a central baffle box. Instead, it has two plates mounted either side of the oil pickup which each have a steel trap door that operates in the same way as the rubber trap doors in the previous example. 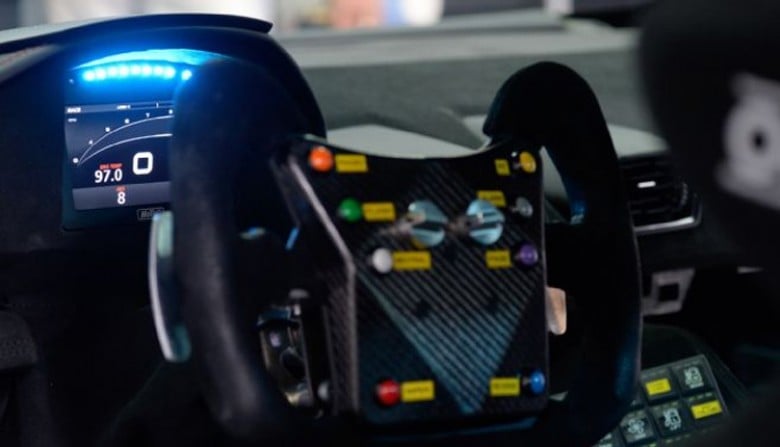 Modifying your sump is just one way to improve the reliability of your oiling system, another factor to consider is your oil temperature, the control of which is an aspect that factory cars aren’t the best at. OE manufacturers did not design their cars for the continuous high RPM, high load operation that they are subjected to on the racetrack so it isn’t uncommon to find your oil reaching temperatures of 140°C after a few laps when ideally, you want to be running at around 100-115°C. As the temperature of the oil increases, it becomes thinner and can even break down which is going to do a pretty poor job of lubricating your engine. 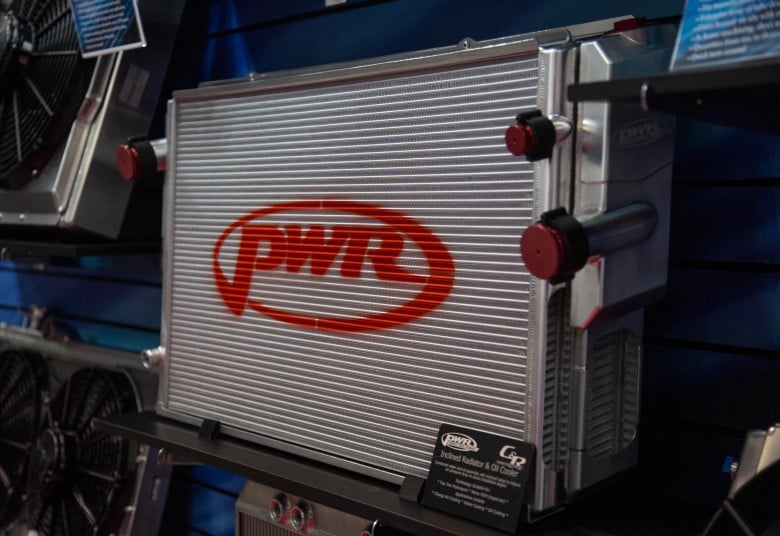 An oil cooler is an essential addition here along with having a way of monitoring the temperature such as installing an oil temperature sensor and running that to your ECU or dash. If you don’t have a sensor, you can also use an external electrical temperature gauge which you can put down the dipstick hole when the car comes into the pits. 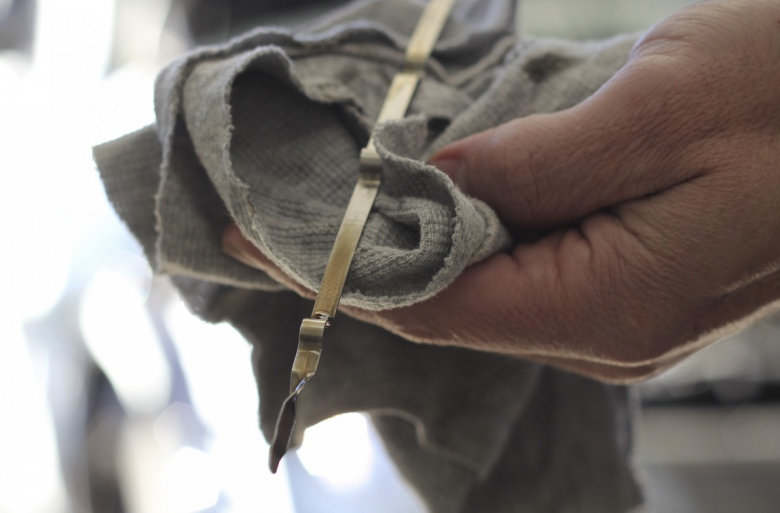 Another consideration is the grade of oil you are using. The Toyota 86 for example in stock form is designed to use 0W20 oil which is extremely thin to improve the fuel efficiency of the engine by reducing the power lost to the lubricant. The downside to this is that it does not offer good protection of your bearings when you start asking for more out of your engine than the manufacturer intended so in this case, we have changed to a Motul 10W40 synthetic oil. 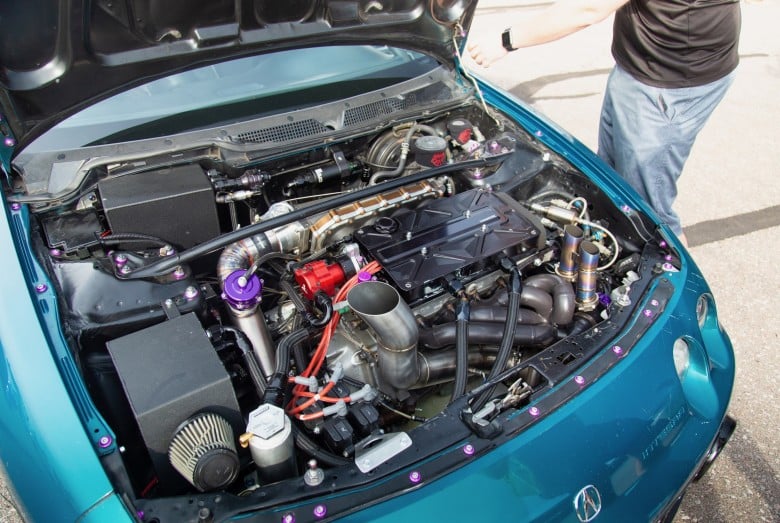 As you have learned, you don’t need to spend your life savings on a dry sump setup to have a reliable oiling system. Great results can be achieved by modifying your existing wet sump system which still allows you to get out on the racetrack without ending up with catastrophic engine damage.

While it isn't as exciting to some as bolting on a new shiny turbo setup and turning up the boost, a good wet sump setup is still an important consideration that deserves attention as you and your build progress up the performance ladder.

Want to learn more about Performance Engine Building? Come along to the next FREE lesson! 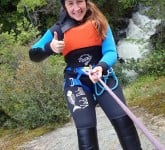 Lauren is the creator of all things caption related as well as providing customer support. In her spare time, you can catch her out hiking or playing with her cats. She claims to not be a crazy cat lady but we're not so sure...