Hopefully this thread will share some knowledge and force me to actually record some of the stuff I do. I honestly wasn't sure if this would be more useful in dedicated threads, or in 1 spot, so I guess we'll see how it goes.

I bought an mx5 and started doing dirt sprints and track days once I finished uni. Learnt a lot spinning spanners along the way, got another mx5 that had a cage and rego a few years later. Participated in my first race in 2014 and in 2018 competed in my first complete race season, finishing 2nd in class, 1st in class last year. Mostly racing against other mx5s, but we share the track with some much more exotic beasts. Another highlight was finishing 3rd outright and with the fastest lap in a wet race in 2017. I've done pretty much everything on the car, expect put the diff in, or rebuild a gearbox... and I've never done the ring gaps.

**Edit** Also, I bought the head already built. It was one of two built locally by a company but unfortunately I don't think they got the return for the work put into it. The engine builder who helps me out said its the best mx5 head he's ever seen in terms of fit and finish, very well design and thought out... his heads however flow a lot more air and that's what most of my competitors are using.

Wet Race... the fast cars were on slicks, and I had fresh rubber. Crazy to see how quick the 911s (old 996 or 997 carrera cup cars) were with slicks and in the wet. The way the classes are split, the lowest class which I am in can only run semi slicks. The classes above can run slicks/whatever they want.

Built to MA (Motorsport Australia, formerly known as CAMS) 2F specifications, with some compromises so I can still drive it on the road.

sway bars - standard or slightly bigger rears depending on track

Extensively ported head… not as extensive as some though.

Makes anywhere from 140-160whp depending on the day.

I’ve been fortunate the last month to get my car on the dyno and play around with some stuff. First thing was to test the car on E85. Fitted some bigger injectors, newer fuel pump and some pump bought E85.

The hypothesis: It won’t do anything.

As the engine is not knock limited, and my version of yoda and owner of the dyno said he’s tested it before on the engine and chassis dyno with similar builds... he was right. Back to 98, and time to build a higher comp short block.

The next thing was intake length; from the throttle body to the air filter, which snakes it was around the front of the radiator in my car. Class rules require me to use the standard throttle body and intake plenum.

I’ve have always had a dip in torque around 4200-5000RPM… right where I need all the torques to get out of the corners. It’s noticeable against the faster cars in class. I know some of them have at least 15whp on me at peak, and generally more power everywhere.

Find the intake length for the best torque from 4000RPM… that fits.

I can gain some mid-range torque/power at WOT by varying the intake length.

3. Tune base line (map need a few adjustments after the e85 tests)

6. Compare lambda of modified intake length to aim. It is pretty easy to see an increase in engine efficiency using the lambda – even easier on the M1 where I can pause the data after the run. Example in the picture below.

8. Once determined the best length, see if I can make it work with the bumper/ducting

The below image shows a lambda trendline for each run. I’ve added a key to the image showing the variation in length from the base line. The variations were quick ballpark measurements, so could easily be ± 20-40mm. Where the lambda trend is leaner (more air) than the red baseline run, the engine efficiency has increase, and if richer (less air) it has decreased. 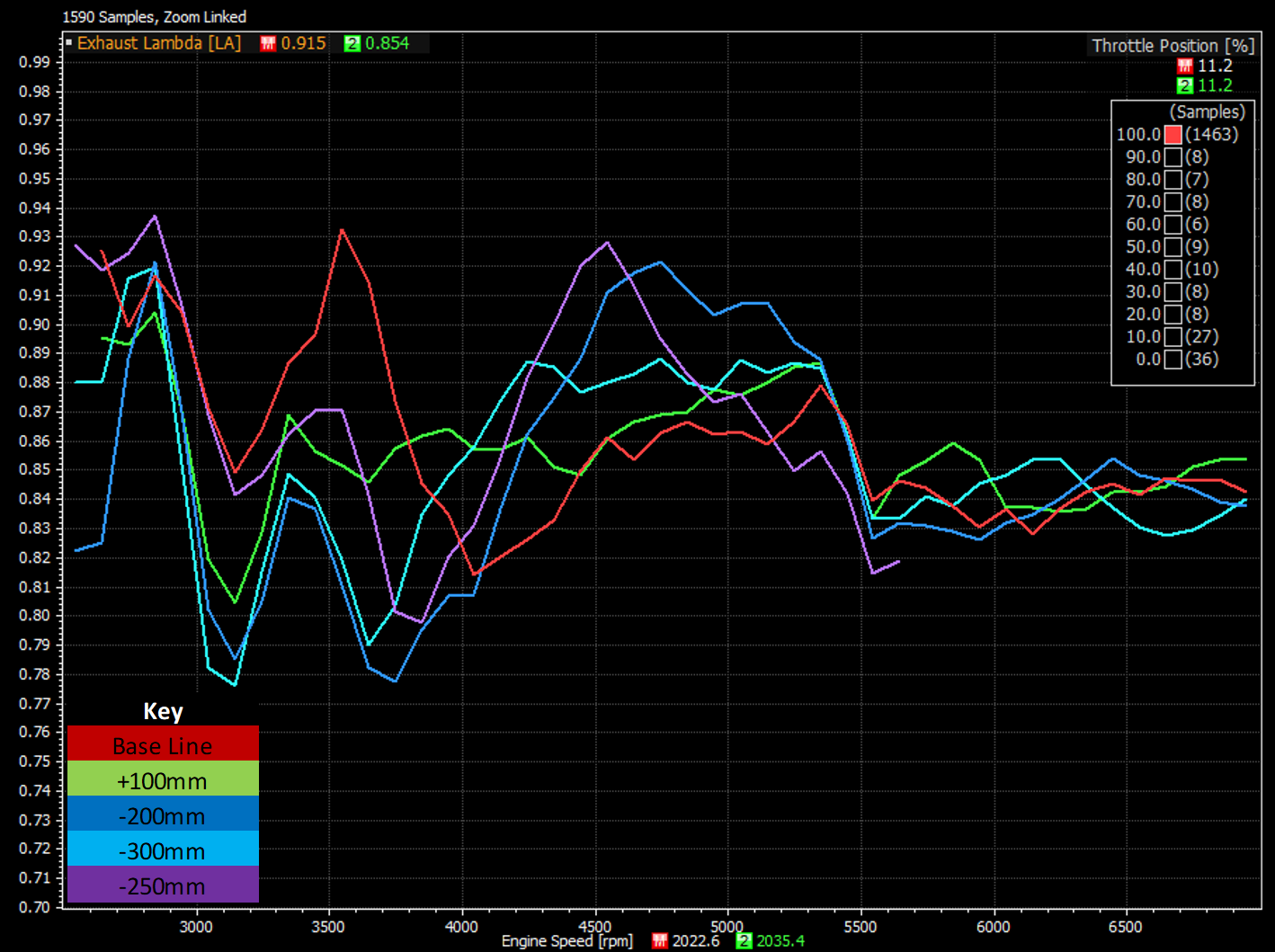 The following image shows compares baseline, -300mm and -250mm. -300 did give me more from 4600 to 5500RPM, but didn’t really work with the bumper and cooling ducting on, and I was hoping to get the power gains from 4000RPM. I would say the -250 run is closer to -200 than -250, however it fit and still gave the car a good improvement, even though the improvements had tapered off by 5000RPM. I should have grabbed the dyno data for the -300mm run to have really compared them.

I guess this is where the exhaust and/or cam timing would have to be altered to see if you could get some more above 5000, and keep the gains down low. I will try play with cam timing again at some point in the future. 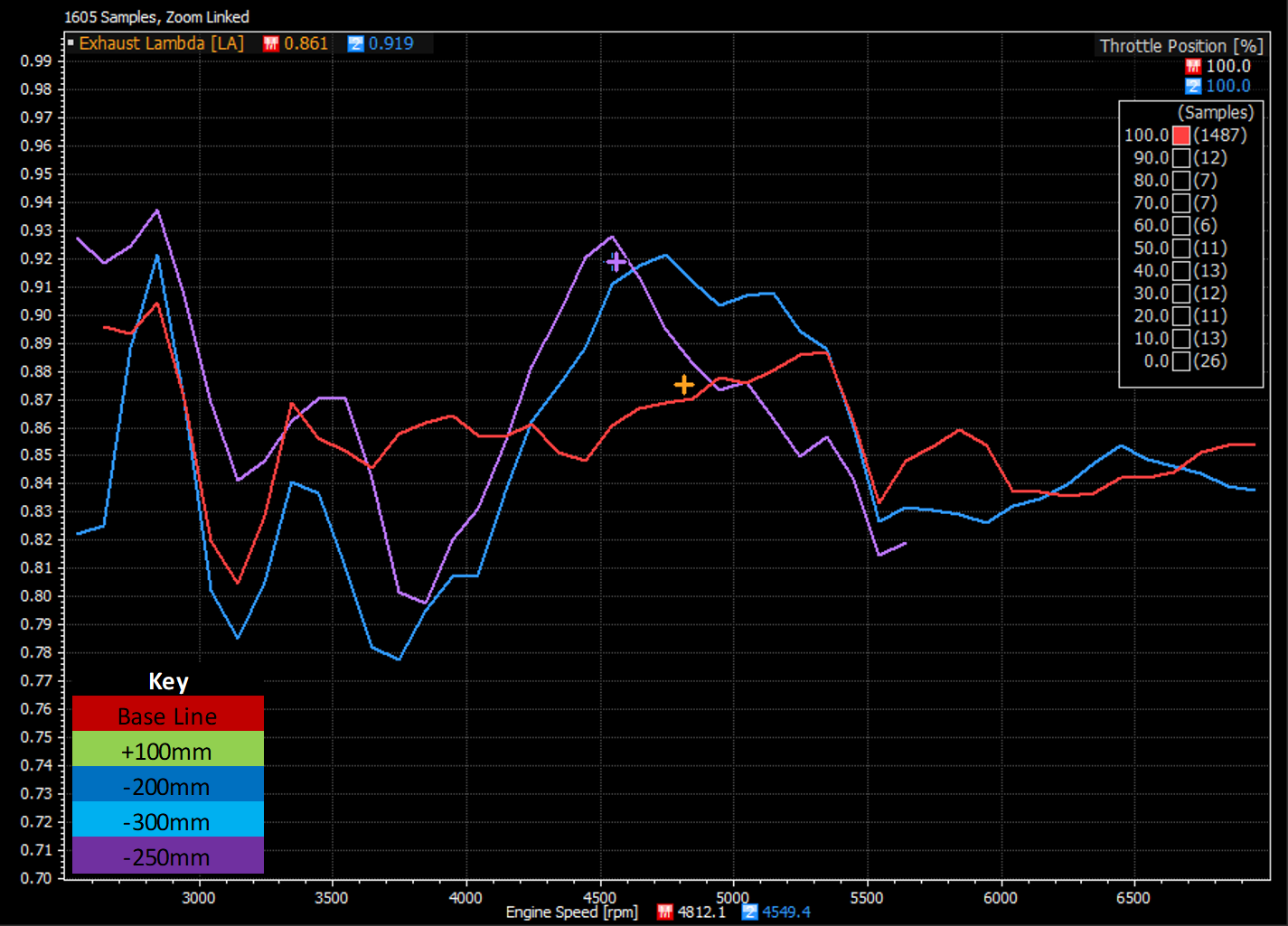 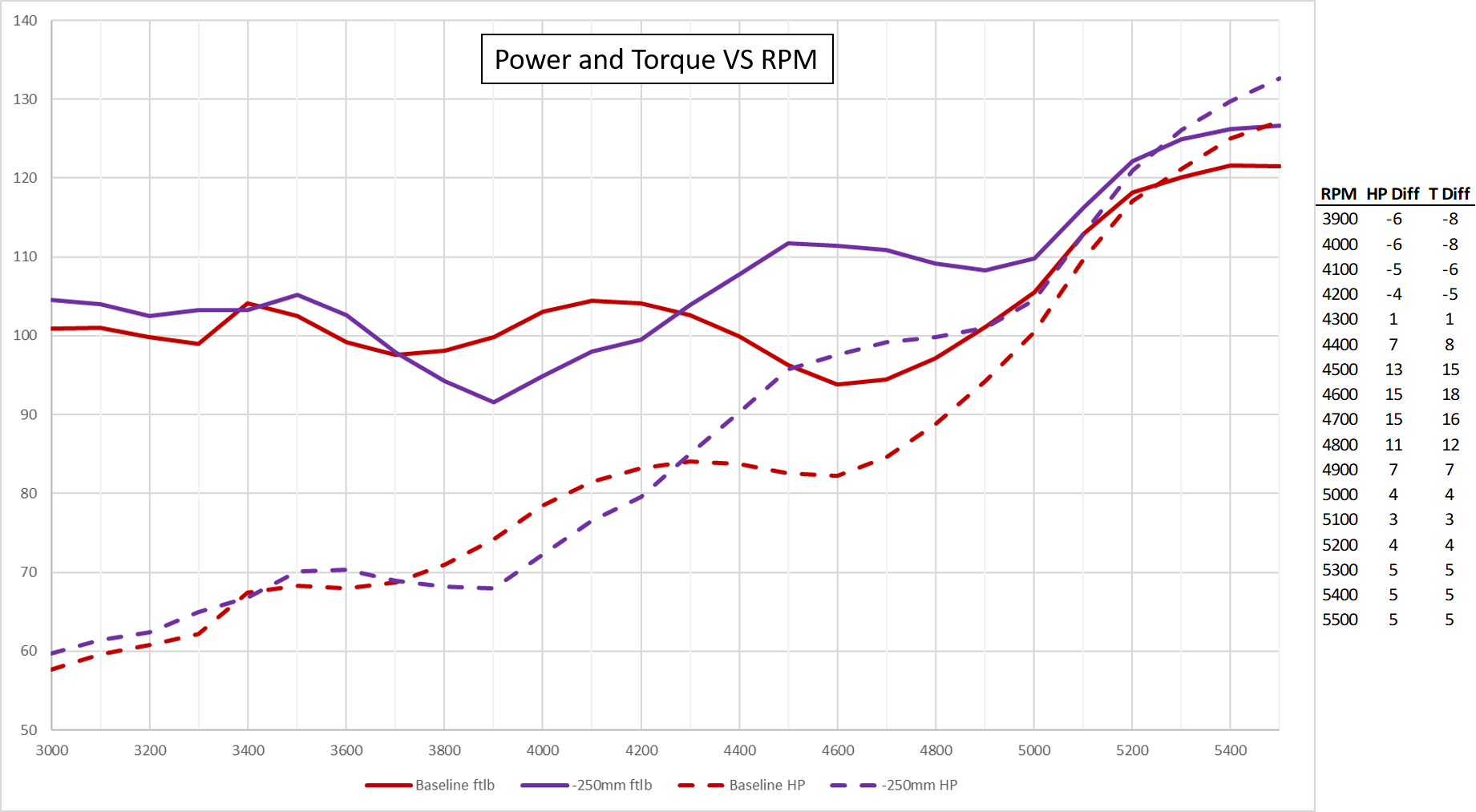 Once we had locked in the length, I was only doing runs upto 5500 to dial in the fuel map. Compared to baseline, there was a loss in torque up to 4300, by 4600, the engine has gained 18 ftlb (19%). The gains taper off, but it still holds slightly more torque through to 5500 RPM – I’m not sure if these small gains are reliable, but generally the dyno results get worse as everything gets hotter throughout the day. There were some minor losses above 5500 and we didn’t actually do another full run to 7k, so I need to fix up the fuel map after some track testing. The final WOT run with the engine efficiency map sorted is shown below, compared to baseline. 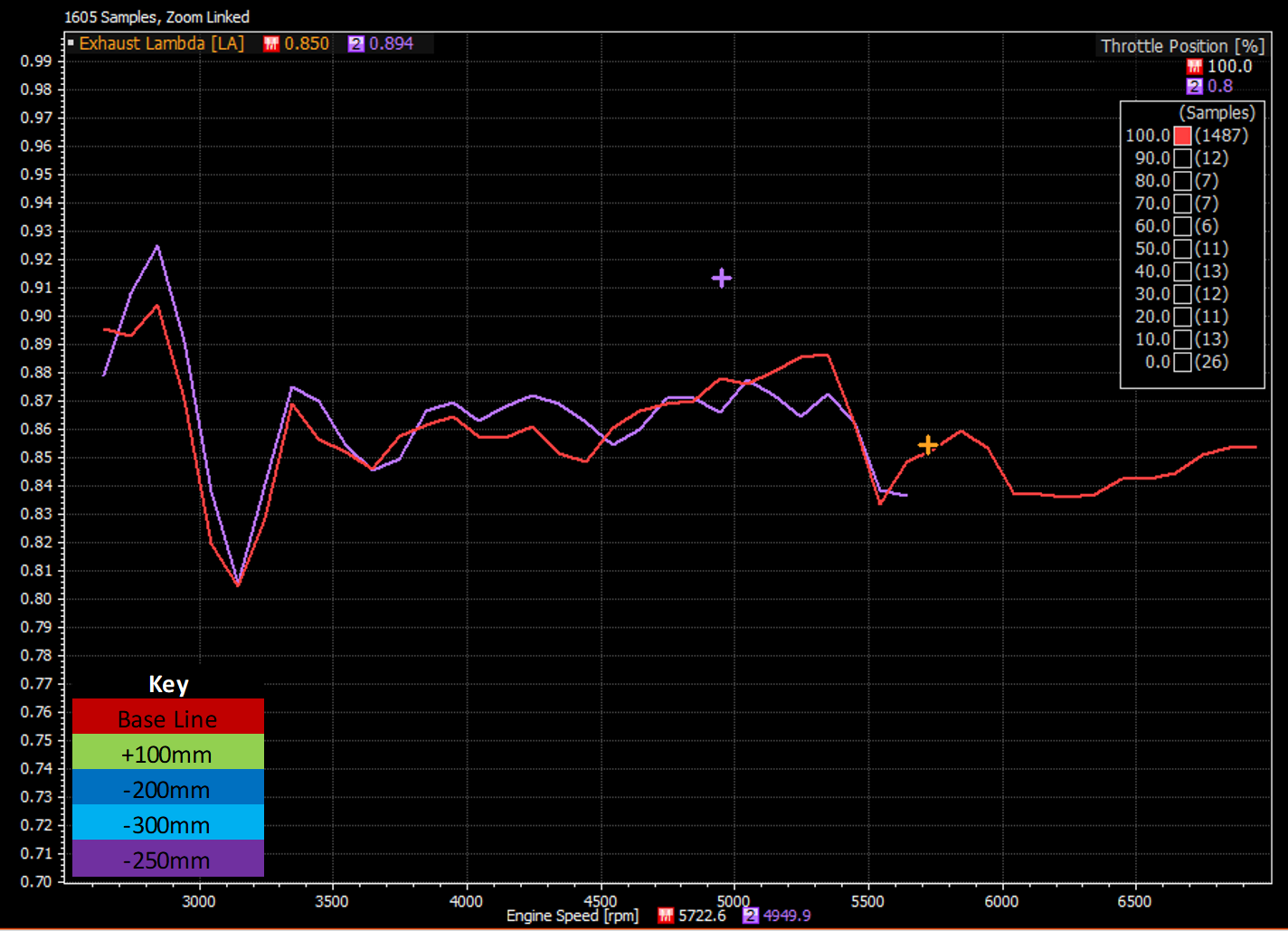 After a late night putting the bumper back on and packing the car, I was out at Lakeside for some testing. I could not notice this difference in power, but I did notice I was more consistently hitting a stage on the shift lights that I don’t always hit coming out of a left hander and up a hill. I even noticed this on the warmup lap.

I had driven the car out so was using yokohamma AD08R street tyres and I have only previous used them at this track once, in February. Comparing the intake air temps, February was 31*C and the first test in June was 21*C, so a much cooler day. Previous PB was 61.1 on natsoft (timing beacon) and 60.98 from the motec. I was able to throw down some faster and very consistent laps, even whilst trying to get used to non-vacuum assisted brakes.

I have looked at the data a bit and haven’t come up with a very good strategy for quantifying the improvements seen on the dyno, but the lap times speak for themselves.

I was able to put down a 60.5s and string together multiple 60.6-60.9s laps (sectors below), and as far as I am concerned, my braking was sloppy. Not only was I very inconsistent in terms of brake pressure, I had used cheap fluid and did not have any cooling hooked up, so they would get a bit spongy after a few hot laps. Was pretty happy with the result, and I know my braking can be improved once I get used to extra pedal force required.

For reference, I raced at Lakeside in March, 30*C intake air temp, nice day, obviously track is more rubbered in racing conditions and my best time and new pb was 59.5 on Yokohamma A050s. I was consistently in the low 60s, and did a few consecutive 59s.

I returned to Lakeside 2 weeks later to get some more testing in. Same tyres, 22*C Intake air temps, same time of day = similar track conditions. I didn’t have as much clean track time, but able to get down to a 60.36 and do a few laps under my previous pb of 60.5. Still with average braking.

I very keen to head out to lakeside again soon whilst the weather is still cool with the A050s and see what I can do.

right click and select view image to make it bigger 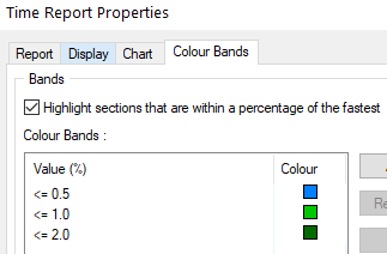 The images above show the lap times and sector splits for the two test sessions. The i2 sector time sheet is pretty handy, I can quickly glance at it after a race and see how consistent I was by comparing the Eclectic time (sum of best sectors) vs my best lap time for that session – If there’s only a few 10ths in it, I am usually pretty happy, as this means I was fairly consistent. Another handy feature is the cell shading based of a percentage of the best sector. The purple sectors are the fastest (obviously) and blue, and shaded cells are set as show in last image. If I find my best time was 0.5s slower or something than the theoretical best, then I know I either had a really tough race or wasn’t very consistent, and might go looking for better explanations/excuses in the data.

You can see during the second test I wasn’t as consistent but did set some faster sectors. We can see that I had a good lap 14 and it gave me a great sector 1 for lap 15, but then I slowed down for the next two sectors.

Thanks for reading if you made it this far. Any feedback/questions greatly appreciated. I hope to do another post regarding braking, boosted vs non boosted.

Awesome read, keep us updated. This is using the full potential of datalogging.

Seems you're on top of it. I didn't see you mention the exhaust manifold and system. If using a 4>1, might be worth fitting a 4>2>1 with pipes dimensioned for your torque dip?