Discussion and questions related to the course EFI Tuning Fundamentals

Hello! I'm very new here and decided to start with the EFI Fundamentals course after watching as much of HPA's YouTube content I deemed relevant to my application as possible.

In the Lean Tuning Myths, Andre mentions that richer mixtures burn slower than leaner ones. Prior to enrolling to this course, I have read differing opinions on this matter all over the web, with some echoing what Andre said, others stating the exact opposite, and some ultimately bridging both sides by stating that pump gas AFRs north and south of 12-13 will burn slower.

May I know if the Lean Tuning Myths video was referencing the last point when the richer burns slower statement was made?

I'm trying to take baby steps in playing with my Lexus 2.0T motor's existing tune using vfTuner. Please do let me know if I have the following correct/making sense:

1. Increased boost will make the mixture burn faster and thus require less spark advance for both safety and leverage on the crankshaft, relative to low boost conditions.

2. Richer AFRs have a cooling effect on the combustion chamber by A. using up more heat to convert the atomized liquid fuel to vapor and B. burning cooler overall.

Some more questions now unrelated to AFR but might as well be thrown out there as well:

3. In the absence of an explicit open loop-close loop transition control, will there be downsides to duping the ECU into open loop by altering the high load values in the catalytic converter temperature tables? This will make the ECU think the cats are reaaaally hot. Low load values will remain unmodified.

4. My NX is running a 200-cell downpipe in lieu of the restrictive factory piece. What tune changes are typically made/should I explore to capitalize on the freer exhaust flow/lower post-turbine pressure an aftermarket downpipe provides? Without changes to the tune, I've only felt faster spool and a stronger top end.

5A. This is pretty advanced compared to the module I'm at at the moment: If I increased logged MAF g/s by retarding the intake VVTi at high rpm (improved VE?), am I at greater risk of det due to increased oxygen fill in the cylinders or safer due to presumably lower air temperatures/fresher air/less overlap/reduced exhaust reversal?

5B. In 5A's case, can I assume that the turbo is still happy and isn't any more overdriven than it was prior to the change, since the MAF reading increased anyway?

5C. On the top end, boost tapered down even further after the change. Since the engine is an air pump, the change in MAF ought to trump the now lower boost at the top of the rev range, which likely came as a result of greater/easier cylinder filling anyway. Do I have this right?

Hope to hear from you guys soon! Huge thanks and I'm loving the content so far. Cheers

2b A rich mixture may be expected to burn hotter, as evidenced by running gas (LPG and CNG) and diesel rich and the affect on EGT.

I may be in error, though.

5x This is why I have an issue with the use of the term VE for the mass airflow ratio in forced induction engines. For me, VE should only be used for the internal pumping efficiency of the engine.

If you increase the internal efficiency (actual VE) of the engine there will be less resistance to the air mass passing through the engine and hence a reduction in "boost" and charge temperatures because it's that resistance that builds the 'boost'.

What it means is that for the same mass of air entering the engine you should expect more torque/power, lower charge temperatures, faster spooling, lower EGTs and exhaust manifold pressure - the latter two because the exhaust gases will also benefit because there is less load on the impellor and hence resistance from the turbine that causes the exhaust pressure, and the hot gases are ejected faster which would be expected to drop the EGTs.

Again, though, I may be in error.

Thanks for the reply, Gord! My understanding of boost as somewhat a measure of resistance led me to wonder if I shouldn't care so much about boost, now that the engine moves more air mass. I also figured it'd be safe to rule out flow reversal as the cause of higher MAF readings, since boost is lower, and overlap is reduced, by way of retarded intake timing. By your comments, I suppose the higher MAF readings indeed trump the lower boost figures.

On the matter of lower turbo shaft resistance - does a lower compressor pressure ratio (lower absolute : atmospheric ratio) and increased flow move things to the right side of the turbo efficiency map - the so-called choke zone? (I don't have a map for the factory turbo, but this seems to be the case for all compressor maps out there.) This is supposed to be a bad thing, but then again, the car's flowing more air mass through. There are also no ball bearings to kill. The factory turbo hums along on a journal bearing. Am I overthinking things, or is there really something to worry about here? Cheers

I think temperature is a bit of a balancing act and egt doesn't necessarily reflect peak chamber temperature. Assuming the same air flow/approximate delivered power richer than stoic will be cooler on petrol, however very rich or lean slows flame speed so the burn is closer to the exhaust stroke which will disproportionately raise egt.

Assuming no knock, the below seems to be true for most "petrol" mixes and ethanol blends. 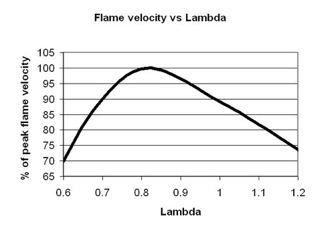