Below is the issues I'm having with cold start on my R33 GTR.

My issue is starting from cold (left overnight cold), i have been through several of the webinars related to this subject and applied my learnings to attempt to resolve the excessive cranking (6 secs) before the engine starts, once the engine starts it idles perfectly around 1100rpm at 0.9 lambda until 60 degrees when closed loop control activates and idles around 0.95 to 1.0 lambda 950rpm. Hot start is perfect even after heat soak.

what I have tried so far:

Utilised Link Start up maps for GTR, no change.

Contacted Link with my issue sent them my base map and a log of the start, they supplied a screenshot of the last GTR they mapped, I replicated their figures but no change.

Gave the car to two separate tuners to resolve and although it was starting better on the day once weather/temp conditions changed the issue returned.

Tuned crank enrichment with Pre-Crank on then off. No Change

Within the same Engine coolant temp cell each morning when temps are the same started with a 50% swing to identify if the cell is lean or rich established that the cell was rich and after several adjustments from say 50% to 25% to 12% to 6% (all within the same ECT cell) the engine was firing up in less than 1 to 2 seconds. I was happy with this. The changes were obviously saved and the following morning I attempted to start the car at the same ECT cell to confirm my changes and results were consistent but again the car cranked for 6 seconds.

My warm up enrichment seems spot on with idle manners and air fuel ratios.

One thing I have identified is my base fuel pressure has been set to 60psi which agreeably not the norm but the crank enrichment is adjusted to suit, ofcourse this may render the maps sent from Link well out due to the assumption their GTR would most likely be base on 43psi base pressures hence why they felt the map I sent them was lean around the crank enrichment and warm up.

With my current fuel set up as soon as the pump prime (5sec) stops the fuel pressure doesn't hold, I initially thought this was an issue with no check valve in the outlet of the fuel pump, so I fitted a check valve but the fuel pressure after prime returns to zero within 3 to 4 sec. Having researched aftermarket fuel pressure regulators this loss of pressure seems to be accepted as normal.

To keep my testing consistent each time I attempted to start the engine I would make sure to crank within the 5 sec fuel pump prime to ensure injection pressure is at the 60psi base fuel pressure.

I turned to ignition and confirmed trigger 1 and 2 are signalling within the first crank (1 sec).

With the exception of the cold start the car idles steady, starts from hot perfectly, off boost manners are good and fuelling on and off boost are spot on.

Is it acceptable to carry out several start attempts (within the same ECT cell) to dial in the fuel as in my mind surely after several attempts the intake walls will become more enriched and when compared to the initial start as the 3rd start attempt must have slightly more enrichment ?

I am being as methodical as i can and as the car is a road car I'm looking for an OEM like start from cold.

I feel I have no consistency with the results from day to day after my changes.

Reference changing the base fuel pressure to 43psi, I feel I've not got the skills yet to adjust else where in the map and feel 60psi is acceptable on top feeds and simply adjusting fuelling on the crank enrichment can be done.

I have attached my base MAP .

Any help or pointers would be greatly received.

Does it help if you set pre-crank prime to "start position"? Can you attach a PC log of a cold start.

I agree with Adam. /\ I recently got through a similar issue on my 26 with a g4+ also it sounds like you have verified that you have good fuel pressure at initial cranking. (key on a few times before cranking to look for a difference). Another trick to prove where the issue is would be to spray a little shot of ether or flammable brake kleen into the intake and immediately crank it cold. If it starts right up then you know the problem is fuel related. if it displays the same symptoms then you may need to look at ignition or elsewhere.

Thanks Adam and Johnny,

Some good points to check there,

I adjusted first crank enrichment to 150% and it did help. Looking to set up the digital input for the prime function on "Start Position" as i think this is a more accurate method for starting.

I took a log of a start (see attached) and found something quite interesting. Looking at the MAP log timeline compared to the RPM timeline it appears the car is cranking for a good second before the ECU is seeing crank rpm which if not the sole cause of my long cranking starts is a contributing factor. My thoughts are relating the issue to my CAM and crank triggers, they are both acknowledged almost instantly when cranking but for some reason the ECU isn't getting the crank rpm for that second sometimes two. This would relate to inconsistent starts some being an almost instant OEM start and some with a few seconds of cranking before starting. Could this be the due to different starting positions of the CAS and crank triggers when for example if the CAS trigger sensor is very close to the pick up from a degrees point of view and say the next start the pick up is just past the sensor then it would have to go through potentially 720 degrees before feeding back TDC on compression stroke to ECU. Hence the difference in cranking times.

"Looking to set up the digital input for the prime function on "Start Position" as i think this is a more accurate method for starting."

It is already set up and working - all you need to do is set the pre-crank prime to start pos.

"I took a log of a start (see attached) and found something quite interesting. Looking at the MAP log timeline compared to the RPM timeline it appears the car is cranking for a good second before the ECU is seeing crank rpm which if not the sole cause of my long cranking starts is a contributing factor. My thoughts are relating the issue to my CAM and crank triggers, they are both acknowledged almost instantly when cranking but for some reason the ECU isn't getting the crank rpm for that second sometimes two."

Im pretty sure with a missing tooth crank wheel and the old G4, "720 sync" would occur as soon as the first missing tooth gap passed the crank sensor - so a max of 360deg crank rotation is required before sync can occur. That is about as fast as sync can happen with a generic missing tooth wheel - even with more modern ECU's.

RPM will not be displayed and ignition wont be fired until it has synced. But most other functions will already be working as soon as the first crank tooth is seen such as fuel pump, precrank prime and idle valve to base position etc.

In your log it took 1.02 seconds to achieve sync after the start signal was received, which is about 1 crank revolution, so this particular example is probably about worst case. Yes it will sync quicker in some cases if the "gap" is closer to the sensor. 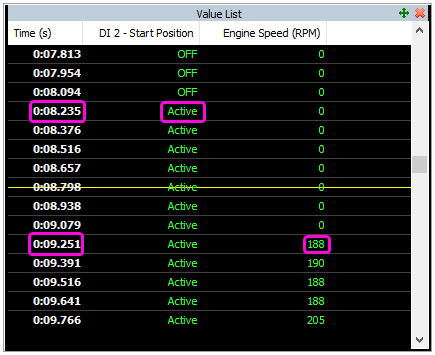 I had discussed the above with my tuner, once he had a look at my log of the extended crank he felt I was maxing the AAC idle control valve during start. He advised attempting to unplug the AAC valve and crank to check if I still have an extended crank time which I did. He then advised he thinks it may be a sticking AAC idle valve and try jacking the throttles open slightly to see if this improved the start. It didn't, still the starts are completely inconsistent. For good measures I removed the AAC valve and cleaned it out (fairly clean on inspection and valve free to move). My intention now is to isolate fuelling and crank over the engine and visually confirm the valve is moving.

Base value of the solenoid on ignition is 80% but I'm unsure where this 80% is derived from.

Once the engine is running, the % of the solenoid does compensate for engine load, lights being switched on, fan on etc. therefore I know the solenoid is operating when running.

The 80% DC during cranking is a hardcoded value. As soon as 400RPM is reached it will switch to the commanded base position + the commanded startup step value.

Idle valve was removed but left electrically connected to the engine harness, when cranking the engine over and trigger sync was completed I did visually confirm the valve did open to the base position of 80%. This rules out the idle control valve as the issue. I did carry out resistance and voltage checks on the cold air regulator and confirmed this is also functioning as expected.

I checked that I have spark after sync and checked fuel pulse, all ok.

I sprayed some cold start in the intake and immediately cranked - no noticeable changes.

Cold start sprayed around intake area to check for any Vacuum leaks at idle - no change to engine note or rpm.

I've tried my best to keep all parameters constant when testing.

I'm unable to identify why there is such a vast change when all known parameters are constant.

Today I experimented with ignition timing on cranking, I ran the engine up to operating temperature and changed the ignition timing around the cranking cells within the ignition table I Advanced in even increments from 10 BTDC to 22 BTDC. At 22 BTDC the engine started very crisply, I then tested with another 3 starts and all started crisply but on the 5th start the engine cranked for a good 2.5 to 3 seconds.

There just seems to be no consistency with results, changes I've learnt to make through HP's webinars have failed to produce expected results. I'm truly lost with this. My next plan of attack is some in-depth research of trigger systems and check over the Crank trigger system.

I appreciated I may be splitting hairs with the starting from 0.937sec and 2.157 but I know it can be better.

Any help or pointers would be much appreciated.