Hi - I am tuning an Indian 111 motorcycle which uses the Bosch ECU ME-17. In my Main Target AFR table Load Vs Rpm I can enter 14.7 into cells from 0.84K rpm to 6K and from 12-65% load and then use STFT and LTFT front and rear to correct the VE Table ( using average method since we have only 1 VE table for 2 cylinders ) and then also use Injector compensation factor front and rear tables to fine tune to try and get STFT and LTFT as close to 0 as possible. I do NOT have Wide Band sensors installed and probably wont invest in these at this stage.

My engine does have a knock sensor and I have safe AFR set at WOT ( 12.63 ) for cells at 95% load and between 0-6000 rpm. From extensive logging the maximum load I have seen at WOT is 90-92%. I have taken out between 5-6 degrees of timing ( from extensive logging ) in various cells around the 80-90% load areas between 2.24K-3k rpm essentially using the knock sensor ignition timing correction as a guide such that the knock sensor is now taking out a maximum of between -2.25 and -3 degrees during knock events. Previously I had excursions of up to -6.75 degrees.

If you set the medium loads to a leaner AFR target, the engine will probably make less power and also be more likely to knock in those areas compared to running slightly rich of stoich. Note that closed-loop will always fluctuate a little leaner than 14.7, then a little richer, then lean, repeating forever when using narrowband sensors, due to limitations of what those sensors can measure. I would keep a close eye on knock if you're using closed-loop narrowband feedback at higher loads than the stock ECU would have done.

Actually, I would try to borrow a used wideband from a friend or buy a new one and resell it later if you don't want money tied up in a wideband sensor.

A narrowband output is basically like a switch. "On" below Lambda 1 and off above lambda 1. So you cant use it to measure anything except lambda 1. 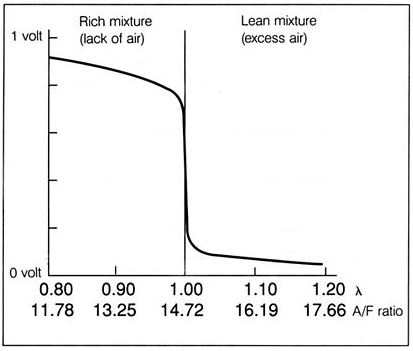 Yes I understand that Narrowband sensors only measure Lambda of 1 accurately. Thats why putting as much of the Targer AFR table into closed loop and then use that percentage error to lambda 1 to correct VE and Injector compensation tables. This is only done during tuning. Once we have the VE and ICF tables dialled in we return the Target AFR table to normal.

Since the ECM must correct for extreme lean or rich conditions, but can only measure a very small AFR range, the ECM employs a fuel error strategy that integrates the amount of fuel needed (either added or subtracted) to get to the average stoic value. This error is called fuel trim and the Bosch ECM consists of a Short Term Fuel Trim (STFT) and Long Term Fuel Trim (LTFT). Both front and rear cylinders have these trims. The LTFT is the integrated STFT over a period of time. The final trim is the addition of the STFT and LTFT per cylinder.There is a direct relationship to the percent error and actual AFR. Since we know the fuel trim error and we know the target AFR, we simply solve for actual AFR and use that as we would a direct measured value from a wideband o2 sensor.

What you've described sounds like an educated guess, basically using the narrowband to tune for 14.7 AFR and then hoping that a richer target will result in a richer mixture. It might work, but it also might not. What if the fuel pump can't supply that much fuel? What if some other compensation is wrong and increasing injector pulse by 20% doesn't actually result in the engine running 20% richer? I wouldn't dare try this on a high-strung engine, but it might be better than a completely wild guess. People modified cars before widebands existed; that's before my time but I hear those methods sometimes resulted in more broken parts or more power left on the table. Perhaps search online for info about 'reading spark plugs' to use the color of the porcelain for estimating fuel mixture, that's something old-school hot rodders used to rely on heavily.

You can purchase a wideband gauge for under $300 USD these days. For me it's an essential for tuning any engine.