hey boys I’ve been road tuning my gtr quite successfully but I’m quite stumped on getting the right lamda reading on higher than idle revs and no load.

for example I’m cruising then back off the throttle while remaining in gear and get lean mixtures I’m trying to aim for lamda 1 in those situations but it’s proving difficult is there a easy way to set this part of the map?

any help will be appreciated

Are you sure you arent running into over-run fuel shutoff?

which engine? Which ecu are you running? What mods?

Not quite sure what over run fuel shut off is ?

Modern vehicles use a fuel (injector) shutoff with closed throttle above a nominal fast idle speed. Every mapping software I know of also has it as an option, often with options of turning it on and off at various rpm, if you like flames ;-).

Other thing is it may be burning off unburned fuel, or deposits, in the cylinder or exhaust, but not sure how likely that is.

Don’t think I’ve noticed a option to turn on or off such a feature any idea where I could find it on the pclink software ?

Don’t think I’ve noticed a option to turn on or off such a feature any idea where I could find it on the pclink software ? 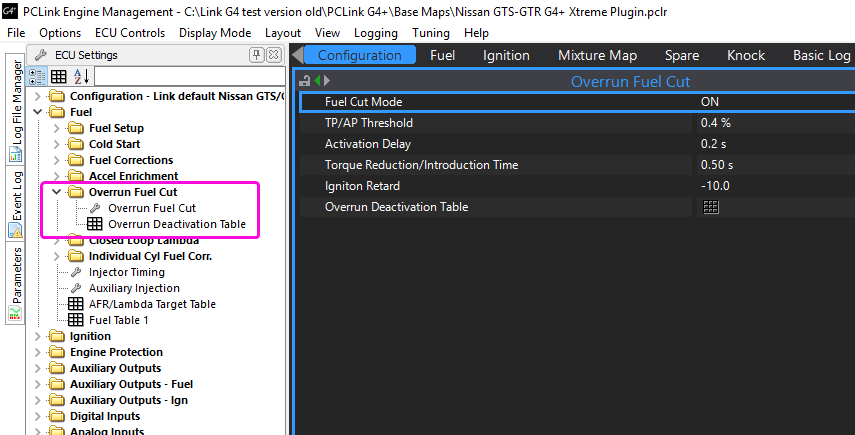 If the car is driving fine, dont worry about what lambda is doing during over-run.

yep found it straight away asoon as i kept an eye out for it .

so totally disregard the lamda reading in overrun situations?

Glad you found it.

AFR is of little consequence on over-run. Remember, the throttle is closed so the cylinder has virtually no air load bar what can be processed through idle bypass channels and idle valve opening strategies, thus we are dealing with very tiny amounts of air and fuel.

If you have over-run shut off disabled you can calibrate it as per any other situation using the fuel cells the ECU traces on that throttle / rpm position.

Have a play with your over-run options until you feel more comfortable with what you are seeing.

but it is nice to know what it is now

dont know how i missed the whole feature

cheers for the help fellas!

Easy done pal. The key element is you sought some advice. :)