Discussion and questions related to the course Launch Control

I would like to connect a wheel speed sensor, for use as data, launch, or traction control. Looking at the options for VR sensors many companies are very proud of their sensors $$$.. and as I'm looking to have 2-4 sensors I thought it might be good to find a cheaper source.

If my ecu, or data system is looking for a VR speed sensor, can anyone tell me generic vr speed sensors commonly found on production cars that can be used? I've found these on amazon..

I don't see any reason to pay $100 per sensor, when GM/Honda/Ford/ect.. have cheaper sensors. Any advice, experience sharing is appreciated.

Provided your ECU or logger can take input from a VR sensor then I can't see any reason why the sensor you've linked to would not work. You also need to consider the maximum input frequency for the input on the ECU/logger. If you're using an ABS wheel speed pickup the tooth count will typically be very high and this can exceed the frequency range of the ECU/logger, effectively limiting the measurement range.

I’d like to setup both launch and lag control on my MKIV Supra and am in the process of a Haltech 2500 Elite install.

I want to maintain OEM ABS but still use the OEM WSS for launch and anti-lag.

Any advice? I’ve purchased HP Launch Control but am still confused on how to practically setup hardware wise.

Supras have a processed digital individual wheel speed signal between the ABS ECU and actuator that you can tap into without upsetting anything.

They also have a general "VSS" signal on ECU pin A2. 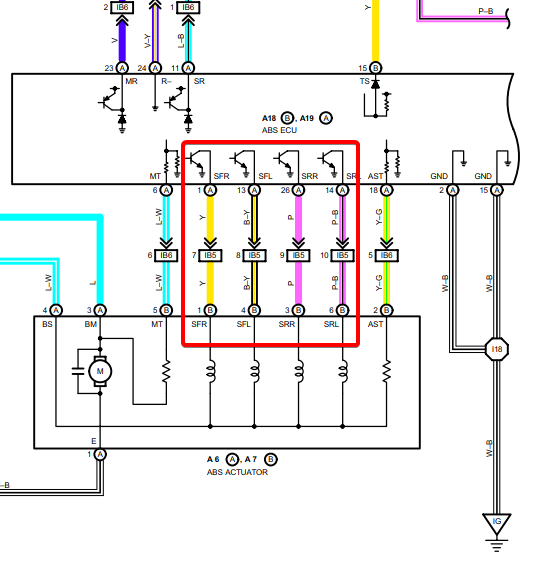 Thanks SO much for the information.

So, would you recommend simply parallel inputting one of the front wheel sensors and the VSS on dedicated analog inputs to the Haltech?

If so, is polarity important for each and if so, how do I determine w/o an o-scope? Not sure if the Elite 2500 has an internal o-scope function?

I’m obviously quite new to all this but do have a good electronics background.

A speed signal will need to be connected to a input capable of frequency, I don't know what Haltech call them but definitely not an analog input. Generally called a digital input or pulse input by most.

The signal is a square wave, polarity doesn't matter, the ecu is just measuring the time between edges received.

Andre, in his Launch Control class, talks about not simply parallel wiring OEM VR Wheel Speed Sensors being used for OEM ABS, but using an interface module to translate the VR signal (which he shows as not being square wave from the sensor but ramped analog) to the aftermarket ECU.

I didnt say to parallel wire into the VR signal, they are not even shown in the snip of diagram I showed. What I suggested is splicing into the already processed digital speed signal that comes out of the ABS ecu.

Ah, okay, I totally missed that important distinction. Grrr! Thank you for your most appreciated help…you don’t have to assist any farther but if you wish to, read on. Ha!

I fear I’m conflating three different ECU operations: 2-Step Standing Launch Control, Post Standing Launch Traction Control, and Rolling Anti-Lag Control (which when utilized I still desire traction control to be operational). I desire to setup all three but am not clear where one ends and the other begins or exactly what inputs I need to achieve all three operations.

Would picking up a single front wheel and drive wheel WSS, post ABS ECU be sufficient for setting up all three operations? The VSS I believe is on the tranny and would be essentially the same output as a rear wheel sensor on a “posi-traction” rear drive, correct? Which begs the question, why does it exhist? I digress 😳

Thanks again, and thanks for bearing with my newbie ignorance.