If it's not really about tuning or wiring. Then it belongs in here.

I've been thinking about some of the flaws, as I see them, with the conventional hydraulic engine hoist most of us will have in our garages, and I think I have a solution.

However, before I start getting into the final details, and patent checking and application side of them*, are there any specific things you chaps and chapesses are particularly bothered by? I may be able to incorporate solutions into the design, if not already done so - there are at least 3 gripes I have addressed so far.

*Looking at both the home' occasional user, and the professional' where time and convenience is an issue - with different price-points.

If I would have to say something, I think having to kick the legs under the car to move them from side to side is pretty annoying. From a transport side of things, one unit that you could assemble/disassemble without having to worry about moving parts hitting you or squeezing your hands.

narrow angle legs on the hoist under the car or maybe only 1 leg under the car on a VERY smooth to rotate and move roller - counter weight it and have the stabilization behind the hoist - or have that as a config option when you assemble it?

Thank you for the input, chaps.

I had thought about that problem, and there may be potential for a design where the leg wheels are mounted on casters with a lock incorporated for locking in the 'straight' position. However, there's a conflict between minimising the height for clearing the chassis/suspension, the rolling diameter of the wheel assembly, and the rotating mechanism of the castor wheel pivot. It may not be that important, though, as the vehicle is usually on stands, or blocks, for access to the underside, anyway, with the clearance being available.

There can also be a problem, as some of you may have found already, between the heights of the 'lift and an engine stand's supports.

At this point I'm thinking of the jacking process - the inconvenience of the pump lever travel and being fixed to one side, the lack of control sometimes when making small lowering movements, and 'bounce' which is more of a problem when heavily loaded. Some, or all, of these issues may be minor for others and/or partly be down to the 'hoists I've used.

I think I may have to leave this on the back-burner for now, though, as I don't currently have access to some of the basic gear for the prototype/development work, and there's a bit of a health issue - but, again, thanks for the response.

Late to the party - but I think the best thing is having the boom section like this: 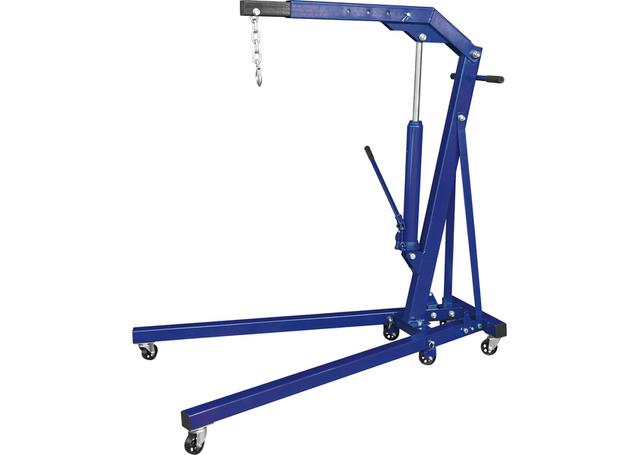 So you have the head of the boom is lower when raised. I've thought of making / mod'ing my current crane... but that will never happen. Too many other things to do.

The other thing I thought about with the wheels, is to have a mounting plate that lets you mount the base of the wheel higher so you can fit bigger wheels, hopefully making it a bit easier to move around. As you pointed out though, there's a few trade offs.

I wondered if it would be helpfully to turn it into a fishing rod - so have a like a black and tackle or similar mounted at the back of the boom, so you can set the crane up and not have to move it as much as the lifting radius changes.