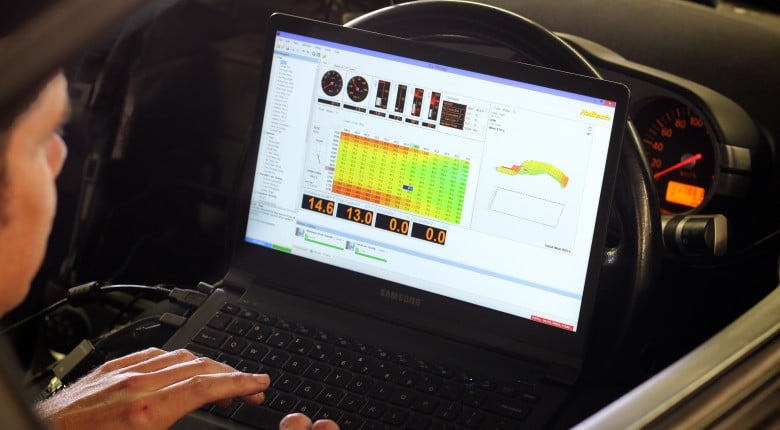 While we all love driving our cars, nobody ever really enjoys shelling out their hard earned cash when it comes time to fill up. While us performance car owners are usually going to skip the manufacturer spec sheets for fuel usage, and head straight to the power and torque numbers, living with poor fuel economy can really eat away at your bank balance. In this article we are going to look at why your engine uses so much fuel and what can be done to improve it.

If you paid attention in chemistry class, you would have heard of the term ‘stoichiometric’. This term defines the ratio of air and fuel that will result in theoretically perfect combustion, ie all of the available oxygen and fuel is combusted. For normal pump fuel, this stoichiometric air fuel ratio is 14.7:1 which means that for every kilogram of fuel the engine burns, it consumes 14.7 kilograms of air.

Now this stoichiometric ratio is important because every auto manufacturer in the world uses oxygen sensors in the exhaust system to make sure the engine runs at an air/fuel ratio of 14.7:1 when it is idling or cruising down the street. This is called closed loop mode, and the ECU monitors the oxygen sensors and either increases or decreases fuel delivery until a stoichiometric air/fuel ratio is achieved.

So what happens if we choose to run a leaner air/fuel ratio than the magic stoichiometric ratio? My own testing has proven that using an air/fuel ratio of around 15.5:1 will actually show a small but noticeable improvement in fuel economy.

Now if we get an improvement in fuel economy with a leaner air/fuel ratio, why don’t we just keep going leaner? With a conventional engine that uses fuel injectors in the intake ports, if we keep leaning the air/fuel ratio, we will get to a point where the engine begins to misfire. Basically the combustion charge is too lean for the spark plug to properly ignite, so an air/fuel ratio around 16.0:1 is about as far as we can go.

There are exceptions though and direct injection technology can show some worthwhile improvements in fuel economy. Direct injection engines inject fuel straight into the combustion chamber and they have excellent control over when the fuel is added and how it is mixed with the air. Remembering that the lean limit is defined by when combustion becomes unstable, or the engine begins to misfire, lean burn DI engines employ a strategy called stratified charge. With this technique the fuel is injected in such a way that the overall air fuel ratio is very lean but the mixture distribution throughout the cylinder is also not uniform. The fuel is directed primarily towards the spark plug so that the air fuel ratio in the vicinity of the spark plug is sufficient to promote stable combustion. This allows for extremely lean overall air/fuel ratios while retaining reliable combustion. Air/fuel ratios as lean as 20:1-25:1 are not out of the question.

So if we can see a good improvement in fuel economy with a leaner air/fuel ratio, then why don’t cars come out of the factory like this? The answer unfortunately is emissions. That stoichiometric air/fuel ratio of 14.7:1 also just happens to be the point at which the minimum amount of nasty pollutants will pour out your tail pipe, and the factory fitted catalytic converter can do its job best. This is the bottom line for manufacturers as if they don’t pass the emissions drive cycle test, the engine will never go into production.

Some manufacturers get creative though and design their engine controls around the drive cycle test, providing a lean cruise mode but ensuring there is no way that the engine will enter this mode during the drive cycle test. GM’s LS1 engine is a classic example with a discreetly hidden lean cruise mode included in the factory PCM. In the aftermarket we can see reasonable gains in economy by changing the control parameters and allowing the engine to enter lean cruise faster and more frequently.

One of aspects that limits the part throttle cruise efficiency of a petrol engine is called pumping losses. That probably doesn’t mean too much to you so let me explain. Imagine you have one of those big plastic syringes, and you push the plunger all the way in and then pull it all the way out. There is little resistance to the air moving in and out of the syringe, hence it is easy to move the plunger. Now imagine what happens when you block the end of the syringe with your thumb. The air can’t move in or out of the syringe and it becomes difficult to move the plunger.

This is what happens in an engine when the throttle body is closed during cruise. The engine is working hard to pull the air past the throttle butterfly and this is why we see a vacuum in the intake manifold. This is called pumping loss, and it reduces the efficiency of our engine at low throttle openings as the engine needs to work harder to do its job.

If you have ever been in the situation where you have tried to jump start a car by rolling down a hill, you can really see pumping losses in action. As you roll down the hill with the engine turning over but not running, you find that you can adjust your speed with the throttle. If you open the throttle completely, you minimize pumping losses and the car will accelerate (despite the engine not running). If you close the throttle completely, the car will slow as the engine must work harder to pull air into the engine.

In the perfect world, our engine wouldn’t need a throttle butterfly at all. The throttle would be permanently wide open and the power would be controlled by some other means. This is the case in most modern common rail diesel engines, where power is adjusted by the amount of fuel injected and this is one of the reasons a diesel engine shows better efficiency than a petrol engine.

Doing away with the throttle body on our petrol engines isn’t as straightforward as it is with a diesel but manufacturers still have some tricks up their sleeves. Variable cam control systems can be used to help the situation at cruise by optimizing the cam overlap to minimize pumping losses. I think we are going to see some big developments in the next decade here though so watch this space.

What you can do

Unless you happen to do your own engine development, chances of achieving major gains through redesigning your engine aren’t too realistic. The good news is that many of the modifications we do to increase power, will also help out fuel economy too. A better exhaust design or a less restrictive intake all allow the engine to breathe easier, improving volumetric efficiency, and this aids economy. If you are getting your engine tuned, talk to your tuner about lean cruise options and what you can do here as it is a great place to make gains.